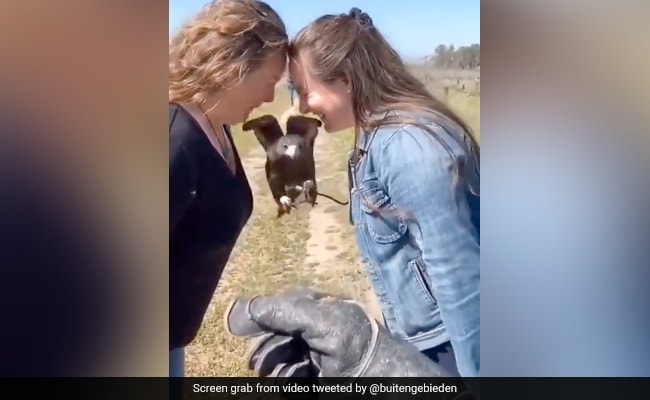 The falcon flies fast and low, once released by the person who had been holding the large bird of prey.

A video being shared widely on the internet shows two women standing with their foreheads touching, while another person directs a falcon into the small gap between their faces.

The caption of the video, shared by Buitengebieden on Twitter on Thursday, reads: “Precision”.

The falcon flies fast and low, once released by the person who had been holding the large bird of prey.

The women appear scared at first, but soon look at ease.

The clip has got over 5.5 million views and more than 2 lakh likes so far. More than 21,000 users have re-tweeted the post.

“Mother nature never fails to make me smile and respect,” said a user while sharing the post.

“And nobody’s wings got clipped even a little,” another user wrote in the comment section.

A third user commented, “I just keep watching it over and over.”

Last month, a video of a woman showing bravery by rescuing her pet goose while breastfeeding her child, who was being dragged by an eagle, had gone viral. The incident took place in North Saanich, Canada’s British Columbia, on May 16, according to People.

Eagles and falcons belong to the same order but from a different family of birds. Adult falcons have thin, tapered wings, which enable them to fly at high speed and change direction rapidly.

They have longer flying feathers, which give them shape more in common with a general-purpose bird’s broad wing. This gives remarkable abilities to become an accomplished hunter and makes flying easier.