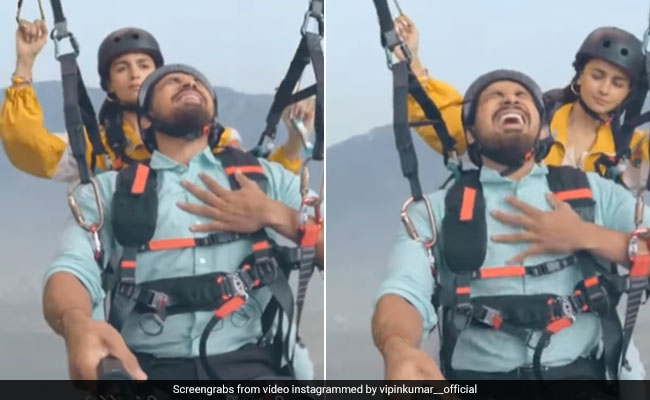 Actor Alia Bhatt is once again dominating the headlines with her new commercial with Vipin Kumar, the man who gained fame as the “Land Kara De” guy after one of his paragliding videos took the internet by storm a few years ago. Taking to Instagram, Mr Kumar shared the video of the ad for a chocolate brand in which he is seen reliving the paragliding experience, but this time with none other than Alia Bhatt.

In the clip, one can see Mr Kumar paragliding while shooting a video with a selfie stick. He even repeats the same line he had said in his original video, which went viral back in 2019. At this point, viewers can see Alia Bhatt, playing the role of flying instructor. While Mr Kumar is seen going through all sorts of roller-coaster emotions, that is when the ‘Raazi‘ actor takes out a chocolate bar and hands it to him to calm him down.

In the caption of the post, Mr Kumar wrote, “Who Said A meme Can’t achive the heights? Who said A meme have just a life of 1 -2 months? Breaking all the bakwas stereotypes and shooting [email protected]” Mr Kumar also thanked the Bollywood actor and Cadbury for the opportunity. “I almost lived a dream life by shooting you @aliaabhatt. I get nervous in the first shot coz I even can’t imagine that one day we both will sit together and have a chit chat,” he added.

In a separate post, Vipin Kumar also shared some behind-the-scenes pictures from the shoot. The images show Mr Kumar and Alia Bhatt on a hand glider in front of a green screen. He even asked his followers to send in their best captions for the photos.

Internet users were quick to react to both posts. One user jokingly wrote, “Looks like you landed at a good place.” Another said, “Many congratulations bro! rise high, tum already asmaan ki uchaiyo m ho.” A third user called Alia the “perfect replacement of Jagga Bhai,” who was the instructor in the original 2019 video.

Chemist urges people not to use candles and says they’re ‘not...