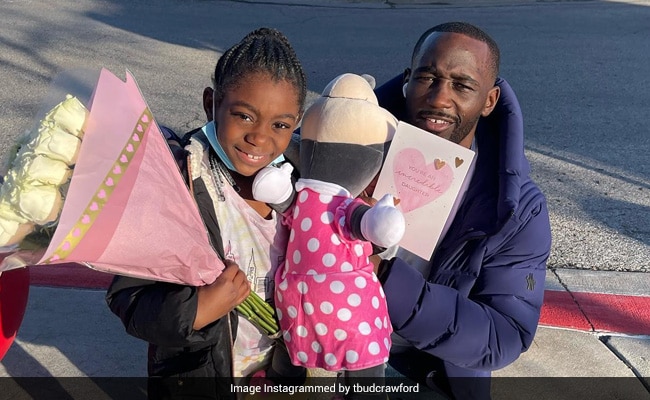 Boxing star Terence Crawford’s seven-year-old daughter just pulled off the unimaginable and won a track race despite a rough start. According to TMZ, a clip shared by Mr Crawford shows his daughter Talaya getting off to a shaky start during the sprint competition at the Wings of Omaha Invitational at Northwest High School in Nebraska.

The video shows Talaya’s shoe coming off right at the start of the race, however, instead of giving up, the seven-year-old slips it right back on and gets to work. Her blunder did cost her a significant amount of time and distance, but within seconds she is seen picking up the pace. Talaya not only caught up to the rest of the pack, but she also passed every single runner and came first.

In the caption, proud father, Mr Crawford, wrote, “I just can’t stop thinking about my daughter’s track meet yesterday. She just doesn’t have a clue how much she just motivated me. This is the definition of not giving, heart and grit. She let it all hang out even when she was hit with adversity.”

The video has taken the internet by storm, with netizens calling Talaya a “superstar”. One user wrote, “she’s cut from a different cloth man, they had a 4-5 second head start and she still beat like a boss. Certified MVP”. Another said, “Man she is a future world champion track…This was so impressive.”

Meanwhile, in another astonishing feat, a 70-year-old man left the internet stunned by completing a 100-metre dash in less than 14 seconds. Michael Kish finished the event in 13.47 seconds at the Penn Relays.

In the same event, 100-year-old Lester Wright also set a record for centenarians. He surged over the line in a time of 26.34 seconds, and he had spectators in the packed arena standing on their feet as he raced against eight other senior athletes.

This is the Meal That Defines Your State: Part Three

The Ultimate Guide on How to Take CBD

‘My pal found out his partner is pregnant – he wants...

Influencer Reveals How Much She Makes After Quitting Job For TikTok