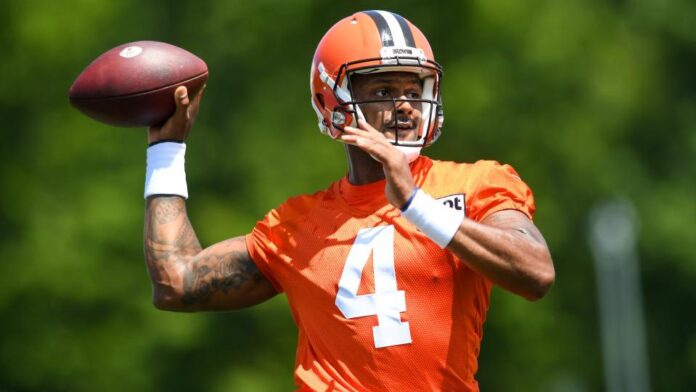 The AFC North playoff standings are in a perfect palindrome state. The Ravens and Bengals are each at 7-4. The Browns and Steelers are each at 4-7.

Aside from the unique-looking standings, that highlights the state of the division through the first 12 weeks of the season. So far, it’s been a two-team race between Baltimore and Cincinnati. Cleveland and Pittsburgh, though far from the worst teams in the NFL, have not been in the mix.

But the Browns have reason for optimism. Offseason acquisition Deshaun Watson will be making his Cleveland debut on Sunday against his former team, the Texans, after serving an 11-game suspension. Watson was accused by more than two dozen female massage therapists of various forms of sexual assault and misconduct during his time in Houston.

The return of Watson with a pivotal stretch of the season forthcoming has given hope to Browns’ fans that a potential run to the playoffs could still be in the cards. Before he sat out the 2021 season, Watson was one of the league’s most prolific passers and was a three-time Pro Bowl quarterback. In that 2020 campaign, he completed 70.2 percent of his passes for 33 touchdowns with seven interceptions and a league-leading 4,823 passing yards, while rushing 90 times for 444 yards and three more touchdowns.

Will Watson’s presence under center change the playoff fortunes for Cleveland? The Sporting News takes a look.

Can Browns still make the playoffs?

The short answer is yes. Cleveland has not been mathematically eliminated from the playoffs, so it still can make the playoffs. But can is very optimal phrasing.  Just because something can happen doesn’t mean it will.

Which brings us to the long answer.

The best place to start is to look at the Browns’ season to date. According to Football Outsiders, the Browns rank 14th in total DVOA (defense-adjusted value over average) and weighted DVOA. That puts them ahead of playoff hopeful teams like the Commanders (17th, 15th), the Giants (21st, 21st), Vikings (22nd, 24th) and Chargers (24th, 25th). That comes after playing the second-hardest schedule to date.

NFL WEEK 13 PICKS: Straight up | Against the spread

How Cleveland got to this point, however, is a bit unexpected. With a backup quarterback at the helm, the Browns rank fourth in offensive DVOA per Football Outsiders, trailing only the Chiefs, Dolphins and Eagles. They also rank sixth in offensive EPA (expected points added) per play behind the Chiefs, Bills, Dolphins, Eagles and Bengals, per rbsdm.

And Brissett has been a major part of that offensive success. He completed 64.1 percent of his passes for 2,608 yards with 12 passing touchdowns and six picks, while rushing 47 times for 238 yards and two touchdowns. His 0.105 EPA+CPOE (completion percentage over expected) ranks 10th in the NFL, per rbsdm, and his DYAR (defense-adjusted yards above replacement) ranks him seventh in the league. ProFootballFocus has him ranked as the ninth-best quarterback in the league.

Brissett has turned in a career year filling in for Watson. Still, no one is going to put him in the NFL’s elite quarterback tier where Watson arguably occupied when he was the Texans QB in 2020.

With that said, let’s look at how Brissett has compared to Watson in his standout 2020 season, with league rank.

Watson at his best was certainly better than Brissett. But was he that much better? The difference isn’t as grand as would be expected going from a backup quarterback to a Pro Bowl-caliber QB.

There are a few things to be noted. First is that the Browns haven’t used Brissett as the focal point of the team’s offense. Only 52.9 percent of the Browns’ plays have been passing plays, the eighth-lowest in the league. While that doesn’t impact his rate stats and grades, it does show the Browns limited how often he was called on to work. With Watson under center, the passing game will almost certainly be used more, meaning Watson will be tested more often.

It also should be noted that Watson will be in more pressure-filled situations than he was in Houston. The Browns are 4-7 and there is talk of a playoff run. The Texans finished 2020 4-12 and third in the AFC South, with the seventh-worst point differential in the NFL. So he was called on to pass a lot late in games with backup defenses and the game out of hand. Watson led the NFL in fourth-quarter passing yards (1,415) and passing yards when trailing (3,445), leading the latter category by more than 700 yards. Of Watson’s 4,823 passing yards, 71.4 percent came when his team was losing. If more than 70 percent of Watson’s yards with the Browns are coming with his team losing, you can give the Browns a 0 percent chance of making the playoffs.

With that better team comes the better supporting cast. Instead of David Johnson at running back, Watson will hand the ball to Nick Chubb. Watson had a good receiving corps of Will Fuller, Brandin Cooks and Randall Cobb in 2020, but Amari Cooper, Donovan Peoples-Jones and David Njoku is a strong group. He’ll also have a much better offensive line protecting him.

Of course, a lot of this is speculative to Watson playing at his 2020 level. When he takes the field on Sunday, it will mark 700 days since the last time he played in an NFL regular-season contest. Watson was one of the best when he last played. But given Brissett’s quality of play and the time between snaps for Watson, it’s fair to wonder how much of an improvement the offense will see with him under center.

Then there’s the real reason the Browns are 4-7: the defense. This was expected to be a strong unit coming into the season with Myles Garrett, Denzel Ward and Jeremiah Owusu-Koramoah. After all, it ranked 11th in defensive DVOA in 2021.

The possibility certainly exists for the Browns to make the playoffs in spite of the defense. While it had a challenging schedule to begin the year, here’s the rest of the slate for Cleveland:

There’s only two teams with higher DVOAs than the Browns left on their schedule, and that’s Baltimore and Cincinnati, the latter of which they handled for dominating 32-13 win. Football Outsiders grades the Browns’ remaining schedule as only the 22nd hardest in the league.

Cleveland also has no room for error. If it loses to Cincinnati and Baltimore and wins all four remaining games, the Browns would still be just 8-9 to finish the year, while the Bengals and Ravens could finish no worse 8-8-1, if they tie in the last week of the season. The pressure will be on for Cleveland to run the table on the remaining schedule, or at least win five of the six remaining games. Even that might not be enough.

Yes, the Browns can make the playoffs. The door isn’t shut. The odds aren’t at 0. Will they? That’s another question entirely, and one to which Cleveland fans might not like the answer.

Mum bans Christmas presents for kids as she doesn’t want a...