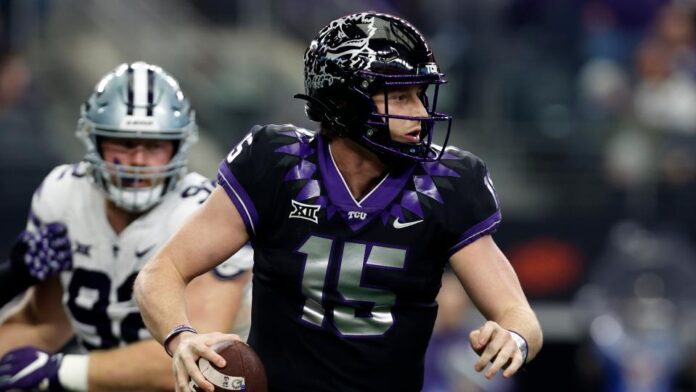 This time two weeks ago, it appeared as if Alabama’s hopes of making the College Football Playoff were non-existent.

Since then, chaos has reigned over the course of Rivalry Week and conference championship weekend, bringing into question whether the Crimson Tide can become the first two-loss team to make the Playoff. Losses by No. 4 USC and No. 3 TCU have made it a talking point, at least.

Now, the question is whether Alabama, which entered the final week of play ranked No. 6, can jump into the top four with losses by the Trojans and Horned Frogs. It appears Nick Saban and Co. will move up at least one spot to No. 5, considering USC (11-2) was blown out in the Pac-12 championship, giving it two losses and no conference title.

The case for Alabama vs. TCU isn’t as ironclad. The Horned Frogs lost a hard-fought game to No. 10 Kansas State on Saturday, overcoming an 11-point deficit in the fourth quarter with a heroic effort by quarterback Max Duggan before falling in overtime.

Even with the loss, the Horned Frogs still have a better record (12-1), and they boasted an impressive resume entering the Big 12 title game. The CFP committee may decide not to punish TCU in favor of a team that didn’t even play Saturday.

The Sporting News breaks down how TCU’s College Football Playoff resume compares with Alabama’s, and which team stands the best chance of making the postseason:

The Horned Frogs have the better record even after Saturday’s loss in the Big 12 title game. The question is whether the timing of TCU’s loss will sway the committee in favor of the Crimson Tide, whose last loss was on Nov. 5.

Rankings are at the time of defeat.

In terms of ranking, Alabama has the “better” loss: 10-2 Tennessee, ranked sixth nationally at the time. in Neyland Stadium. The Crimson Tide also have a top-10 loss to LSU, also on the road.

Of note in those losses: Alabama was defeated on the last play in each game: a 44-yard field goal by Tennessee and a successful 2-point conversion by LSU in overtime. Those losses came by a combined four points.

TCU, meanwhile, lost by three points on a walk-off field goal to Kansas State in overtime. The Horned Frogs beat the Wildcats in the regular season, overcoming a 28-10 deficit to win 38-28 in Fort Worth.

Rankings are at the time of victory.

TCU claims more ranked victories and the highest-ranked victory. It also boasts a stretch of four consecutive ranked wins, over Oklahoma, Kansas, Oklahoma State and Kansas State. The last ranked win was on Nov. 12 at Texas, a team then-No. 1 Alabama beat 20-19 in Austin. The Longhorns were unranked at the time and lost starting QB Quinn Ewers for most of that game.

Alabama’s three ranked victories came against Arkansas, Mississippi State and Ole Miss, with Arkansas and Ole Miss on the road.

That said, the Horned Frogs’ success against their schedule is greater than Alabama’s against its schedule. Despite the weaker overall schedule, their greater record against it gives TCU the No. 2 strength of record, behind only Michigan.

Alabama ranks behind only top-ranked Georgia in that metric. TCU ranks second in its conference, behind Texas, which is ranked sixth nationally at 19.9.

Terrified Brit wakes up in middle of the night to 5cm...

Mortified mum who flashed everyone at child’s sports day given trophy...