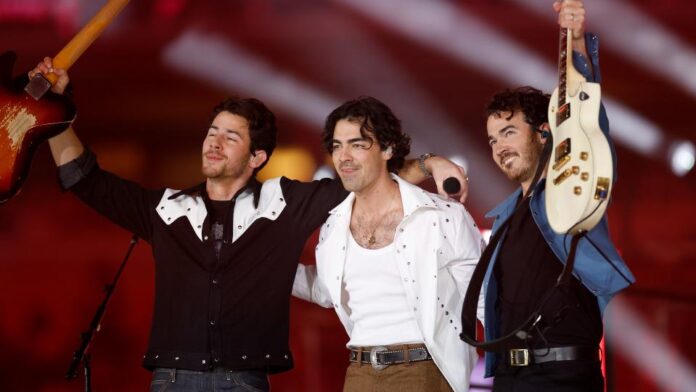 Viewers tuning in to the Giants-Cowboys Thanksgiving Dday game at AT&T Stadium were taken back to the late 2000s with a popular boy band making a reappearance in the halftime show.

The Jonas Brothers took to the field in Arlington not long after wrapping up their second residency in Las Vegas as they prepare for the release of a sixth studio album in 2023.

Brothers Joe, Nick and Kevin Jonas formed one of the most popular bands of the late 2000s, breaking onto the scene in 2005 and earning a Grammy nomination for Best New Artist in 2008. The band became Disney Channel stars, appearing in the 2008 movie “Camp Rock” and starring in their own TV show, “Jonas.”

MORE: Why the Jonas Brothers are big Giants fans

The Jonas Brothers split in 2013 as band members decided to further pursue solo careers. The got back together in 2019 with the release of the album “Happiness Begins” and began touring again.

They have since continued to release singles and perform, and now a new album is on the way.

For the halftime show, they only performed new music, putting together a medley of “Only Human,” “What a Man Got to Do,” “Leave Before You Love Me” and “Sucker.” They did not perform anything prior to their 2019 reunion.

Plenty of viewers were excited to see the band performing.

The Jonas Brothers have some absolute bangers.

If y’all didn’t like the Jonas Brothers’ halftime show, it’s because you’re not real fans who listened to the new album. It was fantastic. #JoBros ❤️

If you would have told me in 2013 that the @jonasbrothers would play the 2022 Thanksgiving halftime show for a second time, I wouldn’t have believed you. I’m crying proud tears that I get to see them still in 2022🥺

Still, there was some disappointment over the lack of the classics.

Son no way they ain’t singing prime Jonas brothers songs ! THE JO BROS GOT HITS WTF IS THIS

Calling the police and reporting the Jonas Brothers for not performing Burnin’ Up.

when i realized the jonas brothers weren’t going to perform “when you look me in the eyes” at halftime pic.twitter.com/TXu18fDTaU

Andy Serkis Is Reading The Hobbit For 12 Hours Straight

Baby Yoda’s Name Has Been Revealed