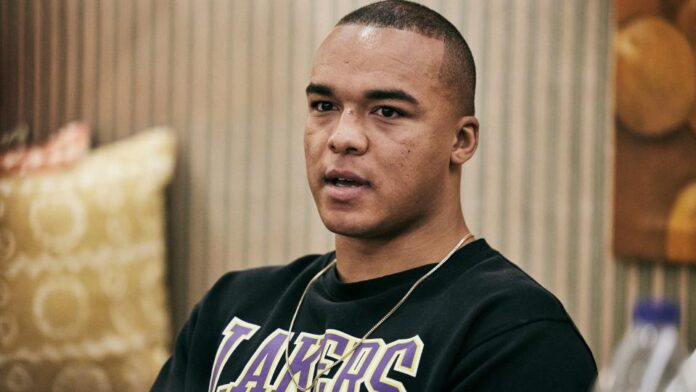 Inside OVO Arena Wembley in London, Dillian Whyte (28-3) faces Jermaine Franklin (21-0). It is a clash between a veteran contender and a rising knockout artist on November 26.

Before the two heavyweights clash, there are several undercard bouts with titles on the line. Prospects will also be in action.

The Sporting News looks into the entire main card undercard of Whyte vs. Franklin.

The co-main event will see Fabio Wardley vs. Nathan Gorman for the vacant British heavyweight title. Making his pro debut in 2017, Wardley (14-0) has won all thirteen of his fights via knockout. In 2020, he beat Simon Vallily to win the English heavyweight title. He defended the belt a year later against Nick Webb. Wardley last fought in July, beating Chris Healey.

“I’m buzzing to be fighting for the British Title, I’ve had my eyes set on this belt for so long and I can’t wait to get my hands on it,” said Wardley. “Nathan Gorman’s a good fighter, but nothing is going to stop me from checking off this next milestone of my career. I thrive under the pressure of big fights like this, I live for it, there’ll be no better feeling than standing over him with my hand raised. I take my opportunities when they come, I’m not going to need any second chances like he did.”

MORE: All you need to know about Whyte-Franklin

“It’s my second opportunity fighting for the British Title, so I’ve got to take it with both hands and this time it isn’t going anywhere other than back home with me,” said Gorman. “It’s against Fabio Wardley, and I know I’ll be facing the best Wardley that has ever entered that ring. Unfortunately for him, that will be met with the best Nathan Gorman, who is improving every second he spends in that gym.”

Bolotniks made his pro debut in 2013. A former Eurasian Boxing Parliament light-heavyweight champion, Bolotniks won the WBO European light-heavyweight title against Steven Ward in 2019. He would win The Golden Contract tournament with wins over Ward, Hosea Burton, and Serge Michel.

In 2021, Bolotniks lost against Buatsi for the WBA International light-heavyweight title. He rebounded in April with a win over Hrvoje Sep.

Sandy Ryan defends the WBC International super-lightweight title against Anahi Ester Sanchez. Ryan (4-1), a 2018 Commonwealth Games gold medalist, made her pro debut in 2021. After losing to Erica Farias in March, Ryan rebounded in the rematch against Farias in August.

Sanchez (21-5) made her pro debut in 2013. An IBF super-featherweight champion, Sanchez lost the title against Maiva Hamdouche in 2017. She has also won gold at lightweight, but lost the WBA lightweight title against Katie Taylor.

Sanchez is 2-2 in her last four fights. After losing against Jessica McCaskill and Chantelle Cameron, she has beaten Maria Soledad Capriolo and Natalia Alejandra Zulema Juarez, both wins via TKO.

When is Dillian Whyte vs. Jermaine Franklin?

How to watch Dillian Whyte vs. Jermaine Franklin

The main card of Whyte vs. Franklin will air exclusively on DAZN.

Dillian Whyte vs. Jermaine Franklin price: How much does the card cost?

To watch Whyte vs Franklin, you can either pay for a DAZN monthly subscription or an annual subscription. Below is pricing by region where available.

Woman ‘pretty scared’ after spotting black cat ‘as big as a...

Mum furious at school over expensive ‘reward trip’ that parents have...