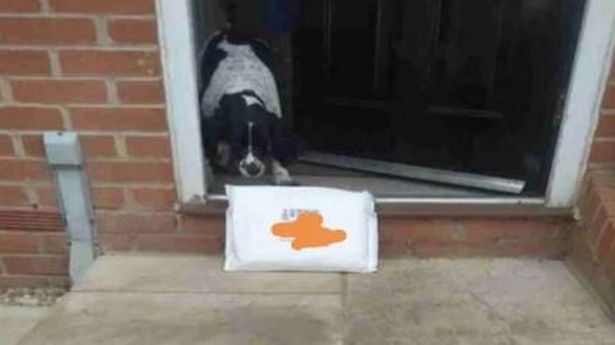 Missing a parcel delivery is extremely annoying – especially when you’ve waited in almost all week for it to arrive. But not only is it infuriating for the customer, it can cost the driver time and money as they might not be paid for the failed delivery attempt.

Wanting to meet his delivery quota, one driver snapped a quick ‘proof of delivery’ photo before rushing off a customer’s doorstep to move on to the next house. In his picture, he accidently captured a puzzled pooch, named Maisie, who wanted to check out who was knocking on her owner’s front door.

After seeing the picture, her owner joked on Reddit: “Glad the dog was in to sign for my parcel.”

While most users laughed at the delivery photo, others joked about whether the parcel was actually ordered by the dog all along.

One user said: “Option 1: Dog has been photoshopped in to make it look like the parcel wasn’t just abandoned on the doorstep.

“Option 2: Your dog signed for your parcel.

“Option 3: Your dog ordered and signed for its parcel. If option 3, check for a guilty stash of newly restored shoes with the chew marks removed.”

Another user added: “I’m laughing because the company I work for handles most of Timpson’s delivery management. I would have loved for this one to cross my desk.”

But Maisie isn’t the only dog who has been captured in a delivery photo as a labrador, also called Mazie, left her owner in stitches after being caught ‘taking in her owner’s parcel’.

Paul Conway, 61, said: “The courier knocked on the door and my wife opened it to receive the package. But she was behind the door still so they just took a photo of our dog.

“It looks as though they are delivering it to my dog. I found it quite funny as all you can see is the dog looking up at the package in courier’s hand.”

How Brit hacked into Nasa for proof of UFOs and found...

OnlyFans Mum’s Kids Expelled From School After Other Parents Found Out...