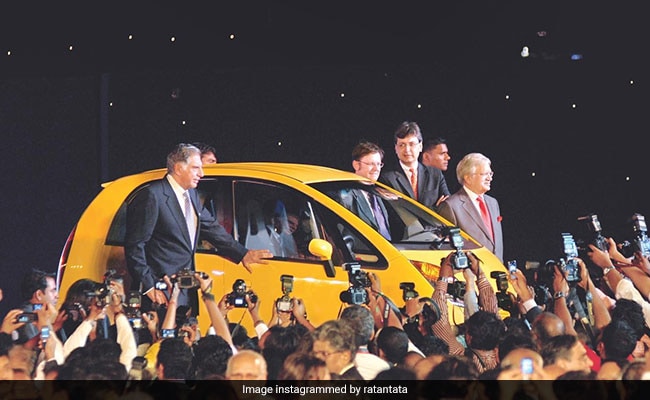 When he launched the Nano in 2008, industrialist Ratan Tata shook the automobile industry. Nano not only became the “world’s cheapest car”, it also culminated of Mr Tata’s dream of offering the comfort and relative safety of a car to users who can afford a two-wheeler.

Now, nearly 14 years later, Tata Group’s chairman emeritus has walked down the memory lane and shared on Instagram what motivated him to launch the Nano.

“What really motivated me, and sparked a desire to produce such a vehicle, was constantly seeing Indian families on scooters, maybe the child sandwiched between the mother and father, riding to wherever they were going, often on slippery roads,” Mr Tata’s says in the post.

“At first we were trying to figure out how to make two wheelers safer, the doodles became four wheels, no windows, no doors, just a basic dune buggy. But I finally decided it should be a car. The Nano, was always meant for all our people,” he further says in Thursday’s post.

The emotional note has received more than seven lakh likes in just four hours of being posted, with many users called Mr Tata “the real gem” and “inspiration for many”.

“Still remember your words ( A promise is a promise ),” a user commented.

“Always an inspiration story launching a car, where a middle class people can afford and bring their dreams to home,” said another.

The story of Nano is one of the most-loved tales of the Indian auto industry. It was unveiled at a packed, near-stampede launch in January, 2008.

The standard variant of the car was given a price tag of Rs 1 lakh (ex-showroom). In Delhi, after adding local levies, registration and insurance charges, the on-road price was Rs 1.20 lakh (a little over $2,500 then).

Doctor Warns People Not To Google Their Symptoms When They’re Feeling...

‘My friend wants to name her baby after an STI –...