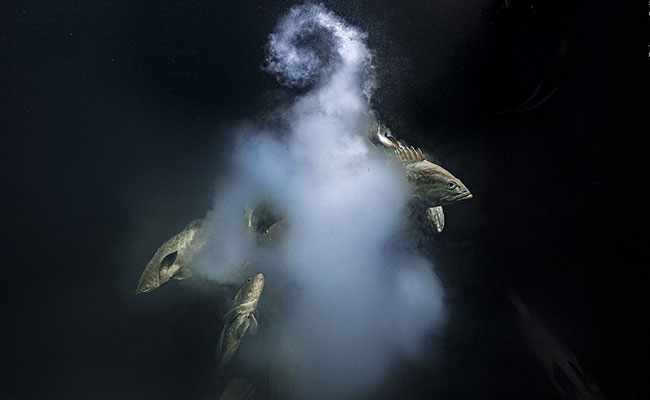 The winners of the Natural History Museum’s Wildlife Photographer of the Year competition were revealed Tuesday, with the top prize going to French underwater photographer and biologist Laurent Ballesta for his “extraordinary” photo of the mating ritual of camouflage groupers. In the ’10 Years and Under’ category, the top prize went to Vidyun R Hebbar of Bengaluru for his stunning photo of a tent spider.

Wildlife Photographer of the Year is developed and produced by the Natural History Museum, London. This year, the competition received entries from 95 countries. Selected from more than 50,000 entries from around the world, the winning image by Mr Ballesta captures the rare sight of “camouflage groupers exiting their milky cloud of eggs and sperm in Fakarava, French Polynesia”, the competition said in a statement.

To capture the image, titled Creation, Laurent Ballesta and his team returned to a lagoon every year for five years, diving day and night so as not to miss the annual spawning. The mating ritual occurs only around the full moon in July.

“The image works on so many levels. It is surprising, energetic, and intriguing and has an otherworldly beauty. It also captures a magical moment – a truly explosive creation of life – leaving the tail-end of the exodus of eggs hanging for a moment like a symbolic question mark,” said Chair of the judging panel, Rosamund Kidman Cox.

Vidyun R Hebbar, a 10-year-old from Bengaluru, was awarded the Young Wildlife Photographer of the Year 2021 for his image, Dome home. The image features a tent spider that the young photographer spotted in his local theme park, where a passing autorickshaw provided a colourful backdrop.

“Tent spiders build the most amazing and detailed webs, it’s a real treat watching them. I love macro photography, because you don’t need to go on a safari to find subjects, you find your subjects in your back yard!” Mr Hebbar said.

“The jury loved this photo from the beginning of the judging process. It is a great reminder to look more closely at the small animals we live with every day, and to take your camera with you everywhere,” said Dr Natalie Cooper, a researcher with the Natural History Museum and jury member.

In the ‘Animals in their Environment’ category, the prize went to Grizzly leftovers by Zack Clothier.

Adam Oswell wins the Photojournalism award for his picture of an elephant performing underwater for zoo visitors in Thailand.

Bedazzled by Alex Mustard was the winner in the Natural Artistry category. The image shows a ghost pipefish hiding among the arms of a feather star.

The Photojournalist Story Award was given to Brent Stirton. His image shows the director of a rehabilitation centre in South Africa sitting with a rescue chimpanzee, introducing it to other chimps.

A mountain gorilla closes its eyes in the rain in this picture for which photographer Majed Ali trekked for over four hours. The image won in the Animal Portraits category.

Head to head by Stefano Unterthiner was the winner in ‘Behaviour: Animals’. The image shows two Svalbard reindeer battle for control of a harem.

The Urban Wildlife Award went to The spider room by Gil Wizen. Gil found a venomous spider hiding under his bed. He photographed the human-hand-sized Brazilian wandering spider using forced perspective to make it appear even larger.

Where the giant newts breed by Joao Rodrigues won in the Behaviour: Amphibians and Reptiles category.

These and other winning photographs will be displayed at the annual Wildlife Photographer of the Year exhibition at London’s Natural History Museum, which opens on Friday, October 15.

In Punjab, These Barber Siblings Are Turning Haircuts Into Works Of Art

Man In Garden ‘Splattered’ With Human Waste Dumped From Plane

Man Whose Halloween Decorations Prompted Police Visits Is At It Again

Demanding job advert offers ‘free rent’ in exchange for being a...

Uncovering The Science Of Sci-Fi With Ripley’s Believe It or Not!