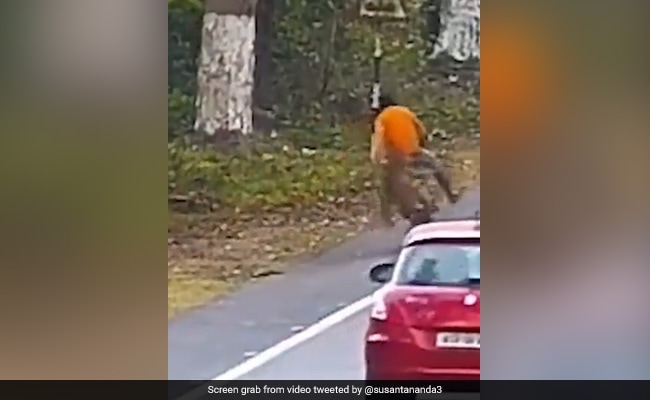 The leopard pounced on the cyclist but quickly ran away.

A video circulating on social media shows a leopard pouncing on a cyclist. According to news agency ANI, the incident took place at Kaziranga National Park in Assam and the video was captured by CCTV installed in the area. The video has been shared by several users, including Indian Forest Service (IFS) officials. As the minute-long clip begins, a man wearing an orange full sleeves sweater is seen riding a bicycle along a highway passing through a forest. Suddenly, a leopard leaps put from the bushes and charges at the man.

The man loses balance and falls but the leopard sprints back to the forest. The cyclist immediately turns back.

The big cat’s jaws struck the man at his waist and he is seen checking it while cycling away from the spot. Two other cyclists are also seen waiting for the man and offer him help. The incident doesn’t impact the traffic on the road and cars and other vehicles are seen passing by normally.

The video has amassed more than 2.5 lakh views and close to 8,000 likes. It also shocked internet users and started a discussion.

“In open Forests beware of Wild Animals and make Sounds n pass. Then they won’t come near. Any way God bless him and all,” said one user.

“The red car saved the day for the cyclist. The leopard was taken aback by the presence of that car,” said another.

ANI report said that the incident took place at Haldibari Animal Corridor on January 19, 2022, adding that the cyclist did not suffer any major injury in the attack.