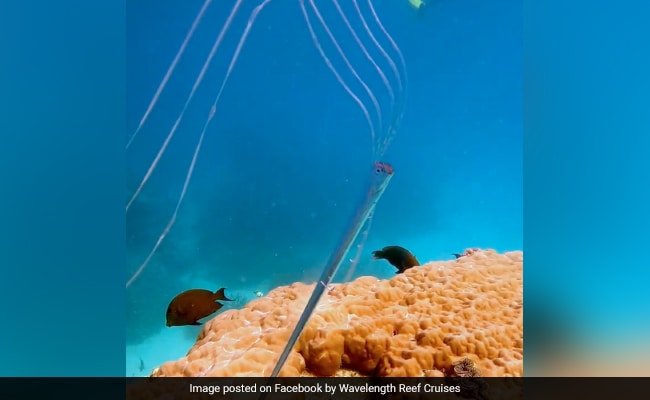 Seeing an oarfish in a shallow reef is “really incredible”.

An incredible video of a young oarfish swimming on the Great Barrier Reef has been captured in Australia.

The clip was shared on Facebook by Wavelength Reef Cruises and taken by Master Reef Guide Tahn Miller. Oarfish can grow to enormous size, however, the one captured in the footage was a juvenile, meaning it only measured about 5 feet.

Watch the mesmerising video below:

Since being shared, the video has left internet users mesmerised. “Thats amazing, so much beauty out there, well spotted,” wrote one user. “Wowser, that is astonishing! Great video guys,” added another.

“My brain took a few moments to work out it was a fish,” Mr Miller told Newsweek. He added that at first, he thought it was a jellyfish with something caught up in it all tangled. However, when Mr Miller saw it swimming, he noticed its eyes and noticed its “mercury-like or polished chrome” colour. “It turned on a dime, continuously tuning to avoid being seen. From the back it looked quite thin and hard to see,” he said.

Speaking to the outlet, Mr Miller further said that he was lucky to have finally taken some shots of the creature from the side. Calling it an “extremely rare encounter,” he went on to add that no one has ever filmed this species as a juvenile. “It was a once-in-a-lifetime type of thing,” he said.

As per the Facebook post, oarfish usually only live in the depths of the ocean, therefore, seeing one in a shallow reef is “really incredible”. As the species are so rarely observed, the Wavelength Reef Cruises said that some researchers believe that they can give off an electric shock.

Viral Video | Woman Falls Off Scooter In Middle Of Road, Wrongfully Blames Rider Behind Her

Fully grown, this species can grow to huge sizes. As per Newsweek, the largest oarfish ever found was 36 feet long, but on average they are usually around 10 feet.

Footage of this species swimming is scarce. Back in April, an oarfish was found on a beach in New Zealand, where it was spotted by local beachgoers.

‘My sister demanded I babysit her kids – now she’s mad...