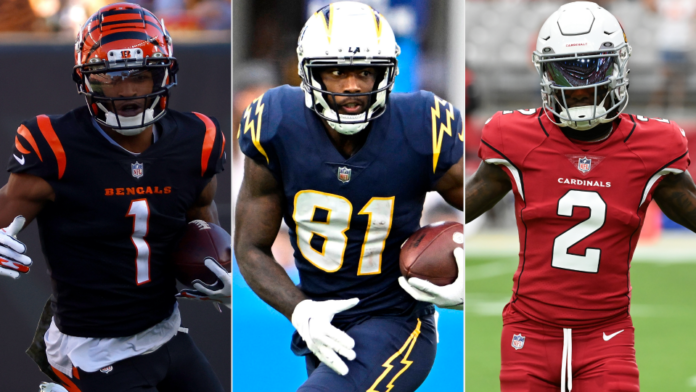 The injuries keep piling up, especially at wide receiver and tight end. While many of the big-name, banged-up TEs simply went on the IR (Darren Waller, Dallas Goedert, Kyle Pitts), a host of top WRs are still questionable to suit up in Week 12. Guys like Ja’Marr Chase, Mike Williams, Marquise Brown, Rondale Moore, Kadarius Toney, JuJu Smith-Schuster, and Jerry Jeudy would all likely be in fantasy football lineups if active, so knowing the latest updates is key ahead of your start ’em, sit ’em decisions.

Below, we’ll give you the latest news on these pass-catchers and break down how their injuries could potentially affect the Week 12 fantasy landscape.

Follow your fantasy team and watch every week during the 2022 NFL season on Sling TV. Stream Sling Orange or Blue for $35/month, or both for $50/month. Right now, get half off your first month, plus SHOWTIME, STARZ, AND EPIX — first month on us! SIGN UP FOR SLING!

Chase (hip) opened the week with a limited practice on Wednesday, and QB Joe Burrow suggested afterward that Chase will suit up against the Titans in Week 12. Coach Zac Taylor wasn’t quite as confident earlier in the week, referring to Chase as “day to day.”

Fantasy owners should tentatively have Chase in their lineups. The Titans allow the third-most fantasy points per game to WRs, so even if Chase is on a snap count, he can put up WR1/2-worthy numbers. Both Tee Higgins and Tyler Boyd are in play regardless of Chase’s status, too, but they’d likely see fewer targets each if the alpha receiver in this offense returns.

Despite some reports that Williams (ankle) got in a limited practice session on Wednesday, he was officially a “DNP” to start the week. Williams returned in Week 11 after a three-week hiatus, but he quickly aggravated his high-ankle sprain and missed the rest of the game.

Fantasy owners should once again prepare for life without Williams. High-ankle sprains are notoriously tricky injuries, often taking at least four weeks to heal properly. It’s unclear if Williams will have to “start over” on his recovery, but at least one week on the sidelines seems likely. Keenan Allen and Josh Palmer will operate as L.A.’s primary wide receivers with Willams out, and both will have at least WR3 value against the Cardinals this week. DeAndre Carter would also have potential flex value in deep leagues.

Brown (foot) has been out since Week 6 but was reportedly close to returning last week. Because he’s still on the IR, the Cardinals don’t have to list him on their official practice report, but considering he got in limited sessions last week, it seems likely that he’s practicing in some capacity.

Moore (groin) didn’t practice on Wednesday and seems likely to sit out at least a week. Groin injuries tend to be multi-week issues, and for an oft-injured player like Moore, it’s unlikely the Cardinals will rush him back.

If Brown suits up against the Chargers, which seems likely, he’ll immediately slot into a WR2 role for fantasy owners. He was averaging 7.2 catches 10.7 targets, and 80.8 yards per game this season, and even though DeAndre Hopkins wasn’t on the field for those games, Brown did have to contend with Moore and TE Zach Ertz (knee) for targets. With Ertz out and Moore looking doubtful, Brown should be busy.

Jeudy (ankle) started the week with a “DNP,” which is a bad great sign after failing to practice all of last week. Fantasy owners will have to monitor his status carefully leading up to the weekend, but he seems more on the “doubtful” side of things ahead of Denver’s game in Carolina.

With Jeudy out last week, Courtland Sutton caught five-of-seven targets for 80 yards and Kendall Hinton caught all three of his targets for 57 yards. Sutton will remain Russell Wilson’s top target, and Hinton will likely remain the WR2 with K.J. Hamler (hamstring) also banged up. Given how deep the WR pool is this week, you likely don’t need to take a shot on someone like Hinton, but he’s an interesting DFS value play. If Jeudy returns, you can slot him in your lineup as a low-end WR3/flex.

Smith-Schuster (concussion) and Toney (hamstring) are on opposite sides of the injury report so far this week, as JuJu practiced in full on Wednesday and Toney failed to suit up. This isn’t a surprise given their respective injuries, and it seems likely that Toney will miss Kansas City’s game against the Rams.

Smith-Schuster still has to officially clear the NFL’s concussion protocol before he’s greenlighted to play, but there’s a good chance that happens. If so, he’ll operate as Kansas City’s top wide receiver and be worth a WR3/flex spot in most lineups. Toney’s projected absence would open the door for guys like Marquez Valdes-Scantling and Skyy Moore to get additional targets, but the unpredictability of Kansas City’s passing game after Travis Kelce makes them tough to trust in a deep week like this.

After being a late add to the injury report and subsequent scratch last week, Everett (groin) got in a limited practice session on Wednesday. This is obviously a good sign ahead of his ultra-favorable matchup against Arizona.

As long as Everett is active, he should be in all lineups, as the Cardinals allow the most fantasy points per game to TEs. If Everett can’t go, Tre’ McKitty would be a boom-or-bust sleeper, but after his zero-target outing in Everett’s absence in Week 11, he’d be tough to trust outside of very deep formats.

Mum demands stepdaughter handle kids’ morning routine so she can have...

Someone’s Selling The New Fiver For 300k And I Hope No-One...