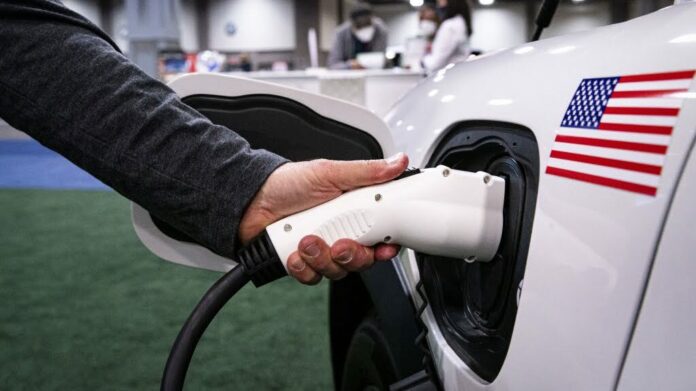 Accelerating the auto industry’s transition from hydrocarbons to electrons is no easy thing for the government to conduct, but the White House is already getting amped up. That (minus the puns) was the message a few Biden administration officials brought to the Washington Auto Show’s public-policy day(Opens in a new window) on Thursday.

The nearly $5 billion in funding included in the 2021 infrastructure law to support building out electric-vehicle charging stations stands among the administration’s first such efforts, and White House reps at the show said it will also be among the first to yield road-visible results.

“We will be able to build a complete national network, coast to coast, every interstate, every major highway,” Michael Berube, deputy assistant secretary for sustainable transportation at the Department of Energy, told Reuters’ Dave Shepardson in a panel.

The resulting 500,000 new chargers will join what Berube said are 130,000 chargers already available for EV drivers to plug into.

But many EV drivers have complained(Opens in a new window) about the spotty reliability of some of these existing, non-Tesla fast chargers, a point brought up during audience Q&A. “We are laser focused on this,” Berube said, adding that upcoming funding-eligibility standards will require 97% uptime.

A Charger on Every Curb

The next panel provided more detail on those standards. Gabe Klein, executive director of the White House’s Joint Office of Energy and Transportation, said the first set—covering interoperability, payment, and siting—should come out in the next couple of weeks.

Klein predicted that development would lead to more states submitting requests for proposals to build chargers with those federal funds (Ohio and Pennsylvania already have RFPs in).

“We think that you’ll start to see some chargers go in the ground in 2023,” he said, with many more coming in 2024 and 2025 as states and the feds continue to learn by doing. “This is going to be an iterative process.”

One key part of car-charging infrastructure—what to do about city dwellers who don’t have off-street parking spots—will apparently require more such learning. Although Klein said “making sure that there’s a charger at the curb” is a priority, he didn’t have specifics to share about how to untangle what looks to be a complicated intersection of federal money, state priorities, and municipal regulations.

The federal government also has its own fleet of vehicles to green, and admin representatives at the auto show sounded most optimistic about their ability to drive progress there.

Andrew Mayock, federal chief sustainability officer, said the share of light-duty vehicles purchased with battery-electric drivetrains had risen from 1% in 2021 to 12% in 2022. Although that still leaves a lot of work to reach President Biden’s goal of 100% EV purchases by 2027, as set out in a December 2021 executive order(Opens in a new window). Some 30,000 vehicle purchases a year will need to be electric to hit Biden’s broader objective of 100% EVs by 2035, with exemptions allowed for military hardware and other, mostly off-road use cases.

The US Postal Service makes up about a third of the 640,000 government vehicles in question. The USPS had been set to make the majority of a massive order of mail-delivery trucks gas-powered but changed its course—with help from $3 billion in Inflation Reduction Act funding—to make most of those and other truck purchases electric.

Mayock called that “a major accelerant” in the transition to electric vehicles but advised that other agencies won’t move forward as fast.

“We’ve got different agencies approaching this in different ways,” he said. “Some have the electric pedal to the metal and some are taking a more measured approach.”

Dad who wears nappies banned from seeing his own children due...

‘Cannibal’ explosion on the sun could disrupt GPS systems on Earth...