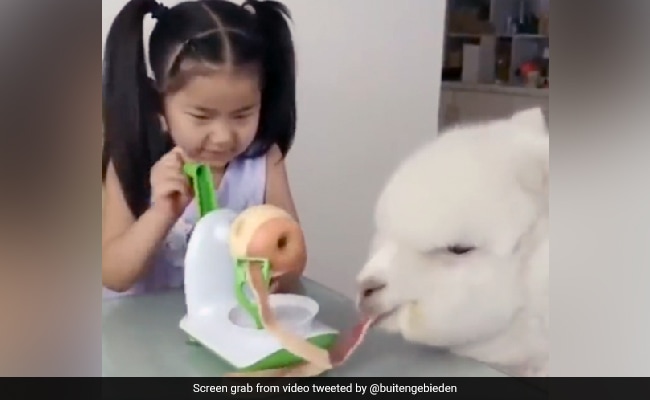 Picture shows a young girl peeling an apple and an alpaca standing nearby eating all of it.

Videos showing pets being allowed to do insane things by their owners are amusing to watch, especially when the owner is a youngster. Most of the times they mimic children’s innocent behaviour by acting like them.

A video winning hearts on the internet shows a young girl using an apple peeler to peel the fruit and an alpaca standing nearby eating all of it.

The video has been shared by Buitengebieden on Twitter on Wednesday with caption “Peeling an apple.”

It has attracted over 1.7 million viewers on social media and has over 91,000 likes in just few hours.

Users on social media enjoyed watching the video a lot and left beautiful remarks in the comment section.

While another said, “Pretty sure this clip helped my blood pressure drop 1000 points.”

A third user recalled his own childhood and said, “I love this! As a kid, I use to eat the apple peelings when my Mom used her apple peeler…and so did my siblings.”

Nearly 35,000 Sign Petition For McDonald’s To Bring Back Plastic Straws