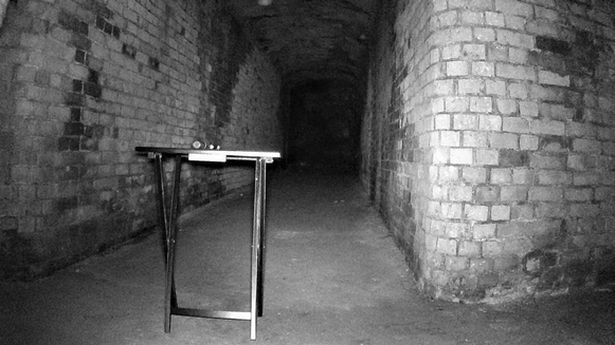 A Maidstone-based paranormal investigative group were sent the image (

Ghost hunters caught a ‘child’s face’ on camera during a paranormal investigation in a haunted fort.

The image emerged after they spent the night in Fort Horsted, which is known for its apparitions.

A team of spirit seekers from Hunter Tours, a paranormal investigation group took a group of ghost enthusiasts into tunnels underground.

They only had torches to light the way, and all agreed they heard something shuffling down a dark alleyway.

Colin Waterman managed to catch the image on camera at the haunted fort in Rochester, Kent.

He told KentLive: “We did a ouija board, we were calling out to see if there were any spirits in the area and a little child came through on the board.

Legendary Edinburgh ghost captured on camera during tour of city
Colin Waterman managed to catch the image on camera at the haunted fort in Rochester, Kent
(

“They spell out the letters, we said are you a little boy and it went to yes, he said that he died there when he was a little boy.”

Despite the strange goings on, it wasn’t until 41-year-old Mr Waterman got back to his home, he spotted the face in his photograph.

He was flicking through pictures of the spooky night and admitted he almost missed the snapshot.

Colin said: “I skipped past the photo and went hang on a minute, and I zoomed in, lightened it up and it came up as a little face. I’ve got a few in the past but nothing as clear as that.

“You get the little goose pimples to think I was actually standing there and that was looking down at us and we didn’t see it.

“I was straight onto the crew members they were like, ‘oh my god, I can’t believe it! What a great photo’.”

Andrew Ayres, who has run the tour company for 20 years, was delighted at the picture
(

The father of two showed his kids, and without hesitation, they also spotted the face.

Andrew Ayres, who has run the tour company for 20 years, was delighted at the picture.

The 54-year-old said: “It’s a really good one, we get stuff like this all the time but that’s an exceptional one.

“It’s the afterwards that you get the evidence, those photographs are reviewed later you’ve got the little boy on the ouija board, communicating and then you’ve got this of what’s quite clearly a little person.

“We run voice recorders during the experiment and people tend to put headphones on and review the recordings and you’d be amazed at what comes out, you get spirit voices saying ‘it’s me’.”

Mr Ayres says the company, which has 60 staff running 400-500 paranormal investigations per year, lets the guests use the equipment, including ouija boards and spirit boxes.

He said: “It’s done on a serious level as it’s a paranormal investigation, no one is jumping out of wardrobes or anything like that.

“We do get people who get freaked out but a lot of people are really into it. It’s a strange sensation. People say they feel quite comforted by the stories that come out.

“We make the guests do the investigating bit. If someone’s watching me then they’ve got to take my word for it. I could be making it up. That’s why we push for them to do it.”

Hunter Tours mostly operates in Kent, including Dover Castle, Deal Castle, Fort Amherst, and Fort Horsted, which describes itself as one of the most paranormally active venues in the South East.

There does not, however, appear to be any evidence of a little boy dying at Fort Horsted.

How 20,000 bodies were buried in mass grave under popular New York City park

‘Severe’ snakebites on the rise due to exotic pet craze in...

Mum has regrets over daughter’s unique name as she fears she’ll...