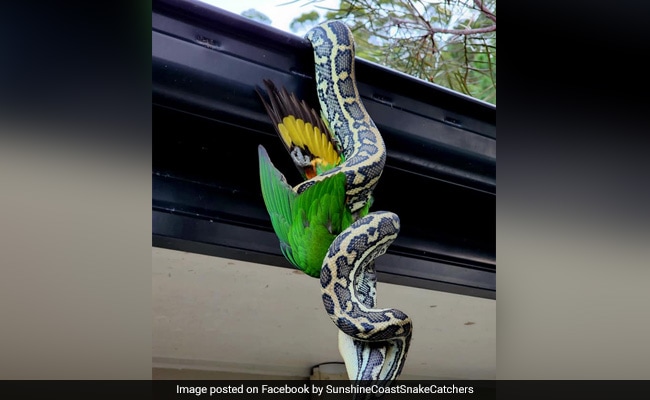 The pictures have gone viral and garnered thousands of likes and comments.

A giant python has been pictured feasting on a rainbow lorikeet while hanging upside down. Taking to Facebook, Stuart McKenzie, of the Australian snake removal business Sunshine Coast Snake Catchers 24/7, posted the photographs of the snake.

In the images, the coastal carpet python is seen hanging upside down from the roof. The bird’s wings can also be seen on either side of the reptile, as its head is completely engulfed by the enormous snake’s mouth.

“Nature can be incredible and brutal at the same time!” Mr McKenzie wrote in the caption of the post.

“Yes, snakes may eat beautiful birds or soft and cuddly possums from time to time, but remember one of the main food items they eat are rodents. Who doesn’t like free rodent control around your home!” the caption further read, adding, “Snakes play an extremely important role in our environment, please give them the respect they deserve.”

Since being shared, the pictures have gone viral. It has garnered thousands of likes and comments. While one user wrote, “Nature at it’s finest and there isn’t a shortage of Rainbow lorikeets,” another added, “Props to the snake. I don’t think that would have been an easy catch”. “Beautiful snake, just doing what we all have to do to survive. Eat!” said third.

Carpet pythons are found almost everywhere in Australia except Tasmania. They are one of the largest snakes found on the Sunshine Coast. Carpet pythons grow up to 11 feet but in some rare cases, particularly large ones, they can reach 13 feet.

As per Newsweek, the species is commonly found along the Sunshine Coast, and can often slither into residential areas in search of food or shelter. They are not venomous but they are incredibly strong, with a mouth full of needle-like teeth.

Carpet pythons kill their prey by suffocation. They strike, capturing the prey, and then proceed to coil around its body. Each time the prey takes a breath, the python constricts more and more, until eventually, the victim dies.

Spoilt pooches have beds in every room, 150 toys and cost...

Perfume Shop worker shares what your go-to scent says about you...