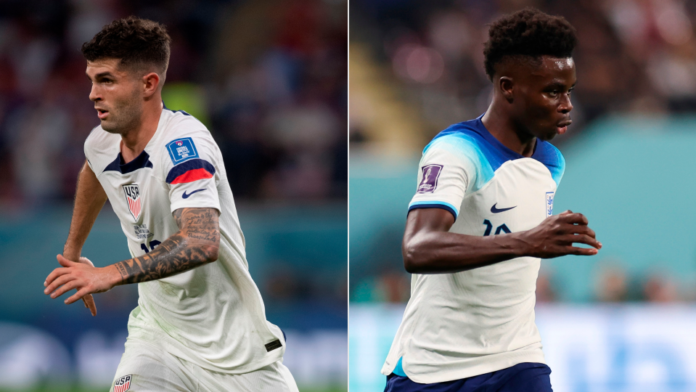 Never has a U.S. men’s national team side looked quite as strong as this year’s World Cup squad. And despite a subpar second half showing against Wales, the Yanks seem as ready as ever to battle against some of the world’s best sides.

England, though, is a whole different kind of test. The Three Lions are fresh off the heels of an emphatic 6-2 shellacking of Iran, and Gareth Southgate’s squad looks poised for another deep run in international competition, as was the case in 2018 and 2021.

The U.S.’s clash with their English counterparts has plenty of revolutionary precedent. But the question remains: can the plucky Americans beat their more established cousins from across the pond?

Perhaps the best way to answer that is to look at history. While the Stars and Stripes haven’t been much of a soccer power (at least in the men’s game) over the years, they have faced off against their British brethren more than a few times.

Some have ended positively. Most haven’t. For all the USA’s struggles against their former overlords, though, the Americans are yet to suffer the bitter taste of defeat at the hands of England in major international competition. That’s got to be worth something, right?

With that, here’s the history of the rivalry between U.S. and England, two sides that have tended to sit in diametrically different positions in the global soccer order over the years.

Has USA ever beaten England in soccer?

Contrary to popular belief, the U.S. has, in fact, beaten England in men’s soccer. In fact, the Americans’ most famous ever victory was over the Englishmen.

The year was 1950 and the gallant but inexperienced U.S. squad was matched up against powerhouse England in the World Cup. Caught up under the thick blanket of Brazilian humidity, the Yanks were overwhelming underdogs.

But bolstered by a world-class showing by U.S. goalkeeper Frank Borghi and a tidy finish by Haitian-born forward Joe Gaetjens, the Americans walked out as 1-0 winners.

DeCOURCY: Are England way ahead of the USA? Friday could change perceptions

Neither the U.S. nor England would advance out of the group stage that year. Still, it remains one of the most memorable moments in American soccer history, a victory held in similar regard to the U.S. men’s hockey team’s 1980 victory over the Soviet Union in the “Miracle on Ice.”

It also represents the only time the United States men’s national team has beaten England in an International match. The two sides have since clashed with one another on 10 other occasions. Each one, save for a 2-0 USA win in a 1993 friendly and a 1-1 draw in the 2010 World Cup, has ended with the Three Lions on top.

With much of Gregg Berhalter’s side contracted to teams in top-five European leagues, the head-to-head matches between American stars and their English counterparts have grown more and more common. However, if the United States gets anything from its clash on Friday, it’ll represent a net positive, at least based on their previous battles with one another.