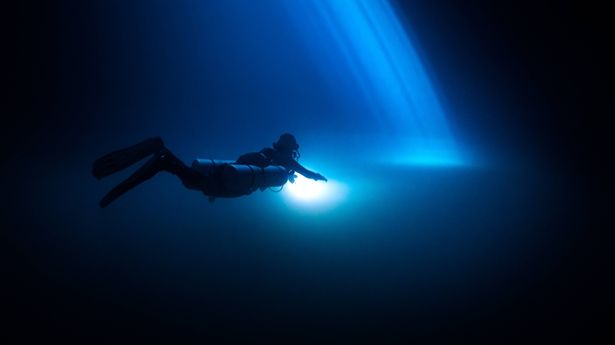 Breathtaking images have been released of mysterious bacteria formations recently explored by divers who plunged more than 200 feet underwater.

One of the pictures show a collection of underwater domes that look like bells inside a dark cavern.

Known locally as Hells Bells in the Zapote cenote in Yucatan, Mexico has grown in popularity over the years due to its chilling natural underwater sculptures.

Another snap shows a beam of light, forming in the Maravilla cenote.

This sinkhole travels down around 230 feet, with a cloud of hydrogen sulfate forming at 98 meters deep.

As light penetrates the cloud, it forms a gleaming beam.

Woman stunned to find a giant three-foot EEL slithering around on her garden patio
The formation of the ‘Hells Bells’ remained a mystery, until recently
(

The underwater images were captured by scuba diving instructor Alessandro Usai on his Sony A6000 camera.

The diver said of the experience: “This place is mystical and maybe a little frightening.

“It is peculiar due to the beautiful formations: The Hells Bells.

“The bell-shaped stalactites decorate the walls. However, their formation remained a complete mystery, until recently.”

He added: “These formations are called biothems. They are formed by bacteria breathing and solidifying in the calcid.

“Also, it took a decade of study for the scientist to discover exactly how they grow.”

This natural underground reservoir exists along Rute de Lose, where a collection of underwater holes extend off the main route.

Divers battled the cenotes, which are very hard to swim in, as they attempted to photograph the spectacle.

This underwater phenomenon can be found in Yucatan, Mexico
(

Mr Usai, who has been photographing underwater for the last five years, was joined by three divers on the trip into the deep blue.

The photographer explained: “The cloud of hydrogen sulfate is dense and looks like a mattress of cotton.

“This place is unique. It was a nice cavern, with warm water and good visibility.”

The newly released images come after a creepy ‘yellow brick road’ was discovered earlier this year on an ancient undersea mountain.

According to livescience, the strange pathway was found by marine biologists while piloting a remotely operated vehicle (ROV) around the Papahānaumokuakea Marine National Monument near Hawaii.

A scientist joked in a Youtube video of the discovery that it bared similarities to the iconic yellow pathway, while others claimed that the rocks were reminiscent of the fictional world Atlantis.

The yellow rocks that seem to resemble the ‘yellow brick road’ are divided and placed at 90-degree angles to form a narrow strip.

They also looked like they were carved and arranged by humans due to the precision.

In the description of the YouTube video, the researchers wrote: “At the summit of Nootka Seamount, the team spotted a ‘dried lake bed’ formation, now IDed as a fractured flow of hyaloclastite rock [a volcanic rock formed in high-energy eruptions where many rock fragments settle to the seabed].”

They added that brick-like divisions between the rocks were likely to be the result of heating and cooling stresses from multiple volcanic eruptions over the years.

Dad in stitches over child’s inappropriate homework with words ‘not meant...

Woman left in tears after getting matching tattoo with pal –...