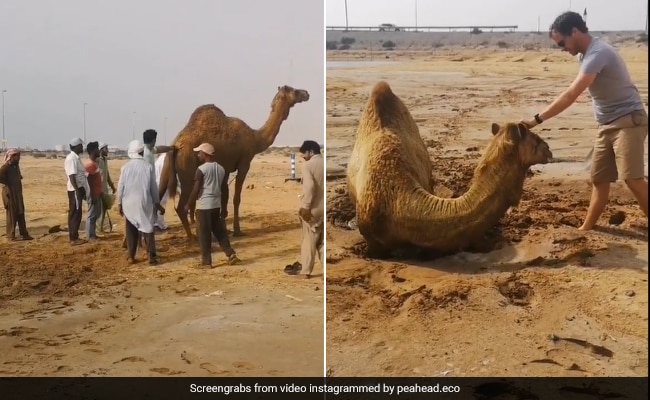 The camel was stuck in the wet sand near Ras al-Khaimah in the UAE.

A group of people recently banded together to save a camel that was stuck in the wet sand near Ras al-Khaimah in the United Arab Emirates (UAE). According to The National, the camel trapped in quicksand was first spotted by Ian Murphy and Christine Wilson, who were on their way to a dog park. Ms Wilson shot the video of the rescue and shared it on Instagram, saying that they spotted the stricken animal close to the road.

Watch the clip below:

In the video, one can see the couple digging the camel out of the hole. Soon, a group of locals can also be seen joining the efforts to rescue the camel.

Internet users have hailed the rescuers for helping the camel. One user said, “Love your courage to help and actually do it.” Another added, “Absolutely incredibly kind of you all. Legends ye are!” “Hero level achieved,” wrote third.

Speaking to The National, Mr Murphy said that he looked over at the side of the road and saw what appeared to be a camel’s head sticking out of the ground. “We didn’t know what had happened at first but it was obvious the poor animal was in a lot of distress,” he added.

Mr Murphy revealed that there weren’t any camel tracks around and it seemed that the animal had been trapped there for some time. He told the media outlet that the camel was stuck in what looked like quicksand.

Luckily, Mr Murphy and Ms Wilson had a shovel in the boot of their car. They got to work straight away, following which a group of locals joined them and helped them with the digging.

The couple said that the camel’s two front feet had been tied together, restricting its movements and making the rescue attempt all the more arduous. “It was made a little trickier because the camel understandably kept wriggling but it didn’t have full use of its front legs,” Mr Murphy said. However, he further went on to add that about 15 people were involved in helping to dig the camel out.

Speaking to The National, Mr Murphy even informed that the owner of the camel also joined them to rescue the animal, following which the camel got free. “It struggled to stand up for a few minutes before it was OK,” he said. Mr Murphy added that the owners of the camel were very grateful and thanked the couple for their efforts.

Man is trying to tame second crocodile after ‘pet’ he rescued...