When traveling, do you seek out the familiar, or do you head off the beaten path to hunt down the weirdest roadside attractions? If you’ve ever taken a family road trip and begged your parents to stop at a Mothman statue or a World’s Biggest, well, anything—this list is for you. These stops along the way, photographed by the late novelty architecture aficionado John Margolies, are a glimpse into the fading, fantastical world of roadside attractions. 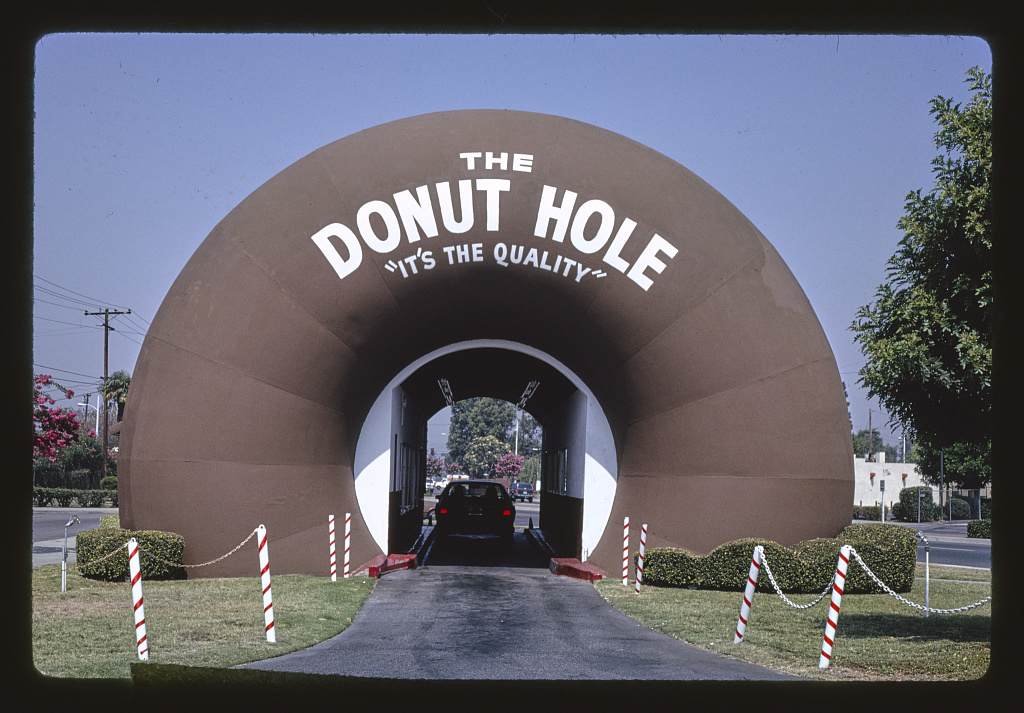 It might seem like lots of pastry places have gimmicks nowadays. And sure, Cali is also home to the Big Do-Nut Drive-in. This style of mimicking the item for sale, only larger, hit America in the 1920s. You can’t miss a coffee shop when it’s shaped like a giant cup of coffee. But this architectural marvel from the ’60s is the only place you can drive through a donut.

While the arches say the quality of the dough is what they are known for, the shape of the building (and the chance to get donuts in a donut gets them a fair amount of attention as well.) Constructed of not one, but two, chocolate glazed semi-circles, these nearly 30-foot-wide ends hold the donut shop inside. You can cruise through the crullers or walk up. 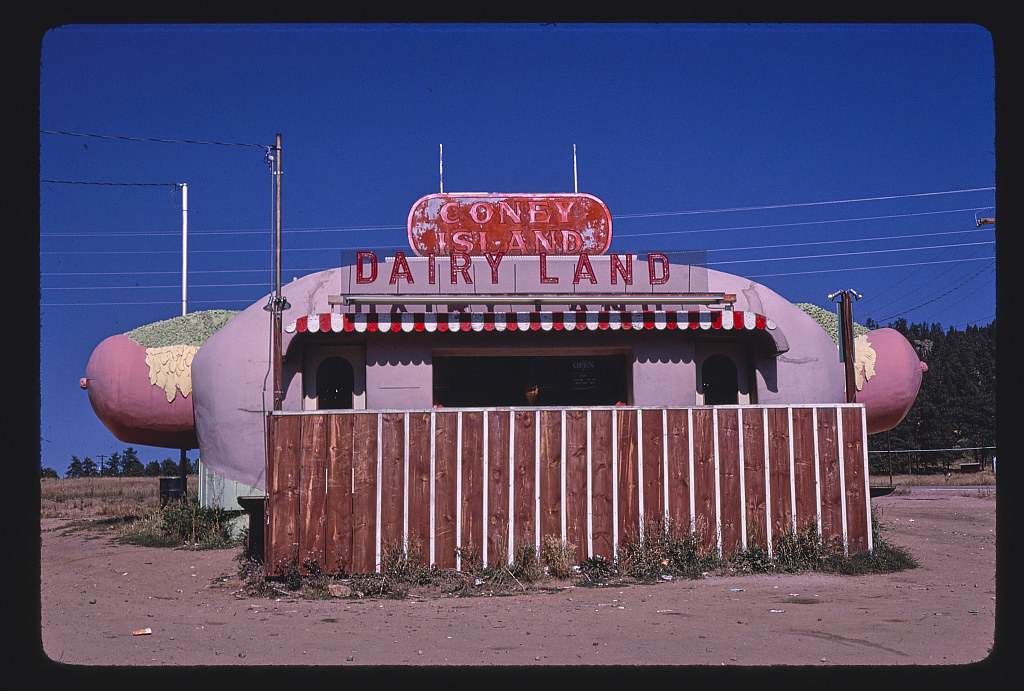 Courtesy of the Library of Congress, LC-MA05- 95

If the popularity of the six Oscar Mayer Wienermobiles has taught us anything, it’s that seeing a giant hot dog gets people talking. Perhaps the frank-makers learned that from seeing hot dog-shaped buildings, like this diner in Colorado.

In his book, Buildings of Colorado, Thomas Noel said that it’s “The best example of roadside architecture in the state.” Vintage postcards proclaim it to be the largest hot dog stand in the West. In case you don’t want to see this giant version, you could also stop by Colorado’s Tiny Town to see the one-sixth scale version. 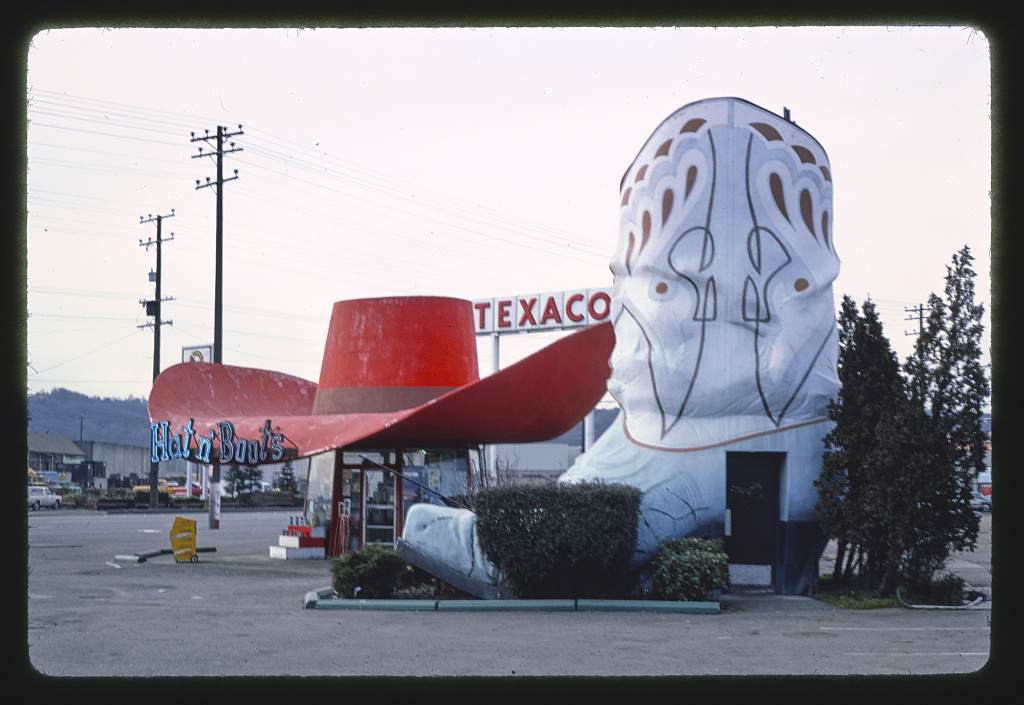 Courtesy of the Library of Congress, LC-DIG-mrg-00006

If someone told you there was a giant statue of a cowboy hat and a pair of boots, what state would you guess they were in? You might picture a western shop in Texas. Instead, Hat n’ Boots was a gas station in Washington. The hat (a whopping 44 feet across) sat atop the gas station’s office. And the boots? The 20-foot-tall boots are actually two bathrooms: one is a light-washed denim color for women, and the other is a slightly taller dark blue boot for men.

But much like the tale of Radiator Springs, when a new road was built, drivers just weren’t coming around anymore. The gas station closed, and the fate of the western wear was in the air. Don’t cross it off your itinerary just yet, though. Because the town loved the pair so much, they were saved and restored, and the huge hat and boots are now part of a park. 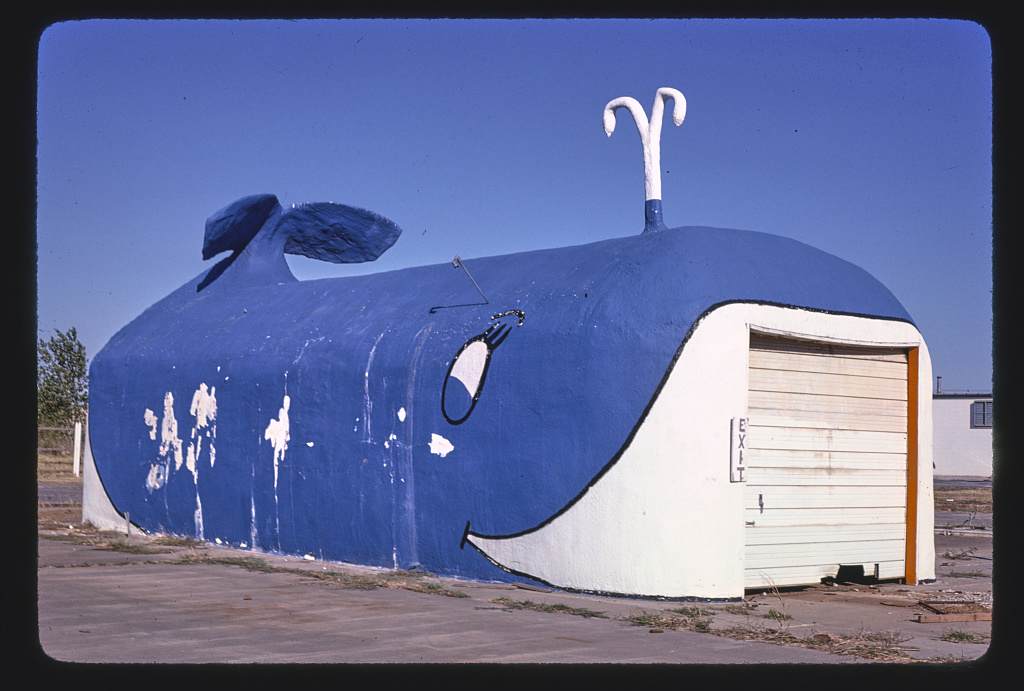 Courtesy of the Library of Congress, LC-DIG-mrg-00074

As cars became more affordable in America and the average family started hitting the roads, places like gas stations and car washes had to find ways to capture attention from afar. Lucky for lovers of all things weird, that means we have plenty of places to explore (many of them shaped like animals). 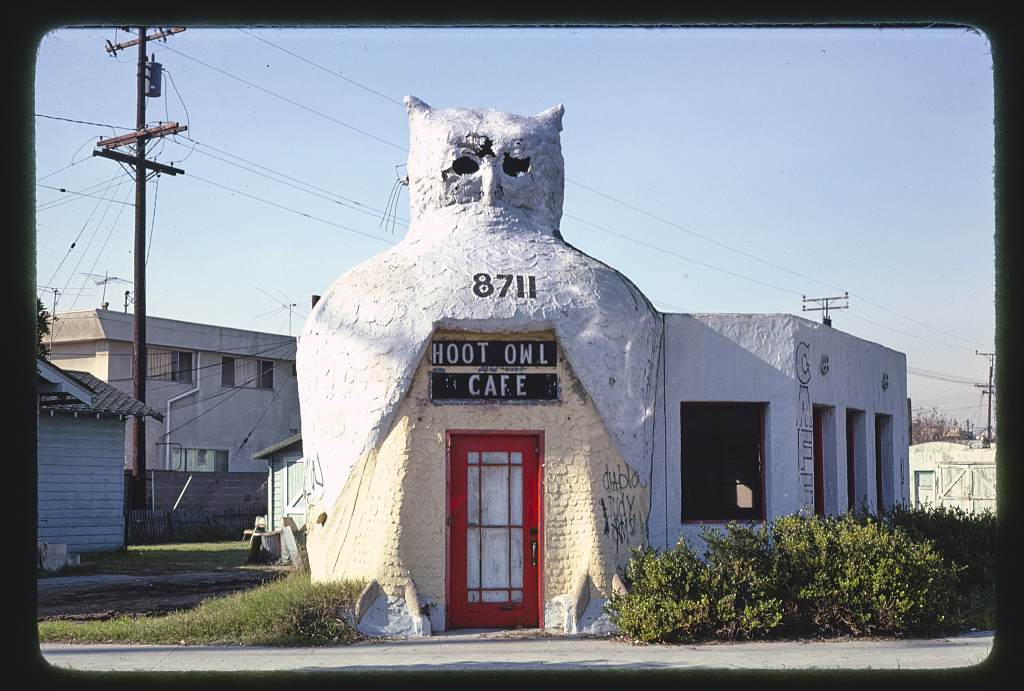 Courtesy of the Library of Congress, LC-DIG-mrg-00084

You might be seeing a pattern at this point when it comes to businesses wanting to stand out. When you search for the Hoot Owl Café, you might think we’re talking about the one in Idaho that looks relatively normal from the outside. If it looks normal from the outside, though, this isn’t the list for it. The Hoot Owl we’re talking about is the one that looks a little bit terrifying.

The old song goes, “I scream, you scream, we all scream for ice cream.” This café did in fact serve ice cream, so they put a sign on the building that said, “Hoot hoot, I scream.” To top it off, the eyes were made from Buick headlamps that blinked, and the head twisted around. Sadly, this one-of-a-kind ice cream parlor was demolished in the late ’70s. 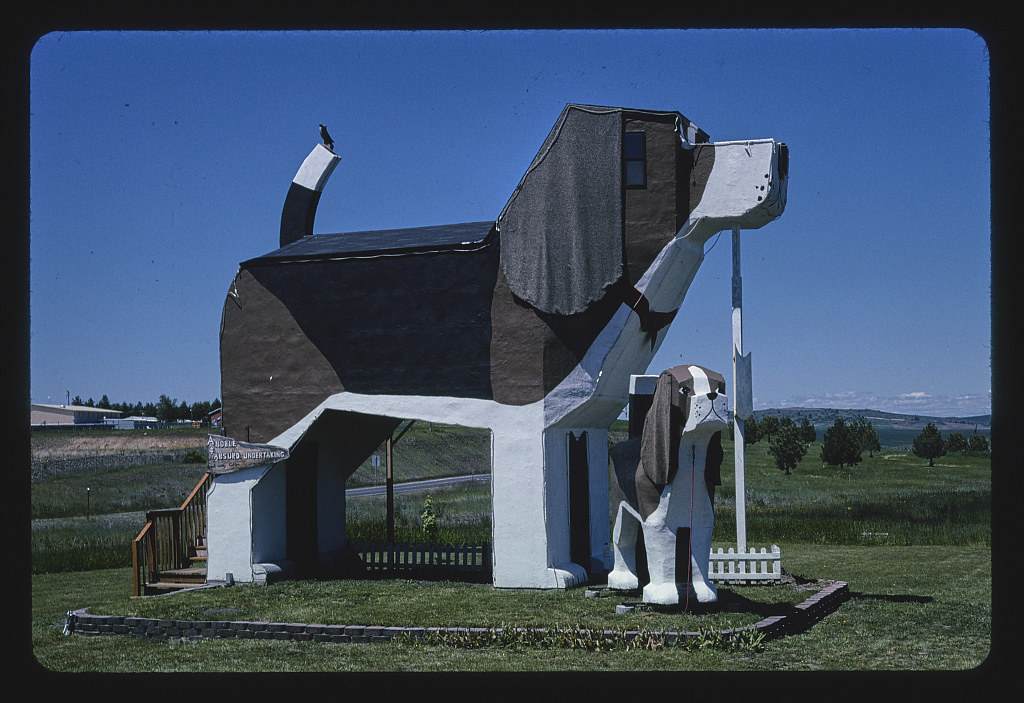 The biggest beagle in the world isn’t named Clifford—his name is Sweet Willy, and he’s a bed and breakfast in Idaho. The pup features a one-bedroom option that draws visitors from all over, and even if you weren’t lucky enough to book a stay inside, you can still take a tour and check out creations made by the owners. He’s also got a smaller friend: Toby, a 12-foot-tall statue nearby.

If all of that wasn’t cool enough to have you add it to your list, the owners are also chainsaw artists. When you stop by Dog Bark Park, you can see the folk-art style canine carvings they’ve made over the years. 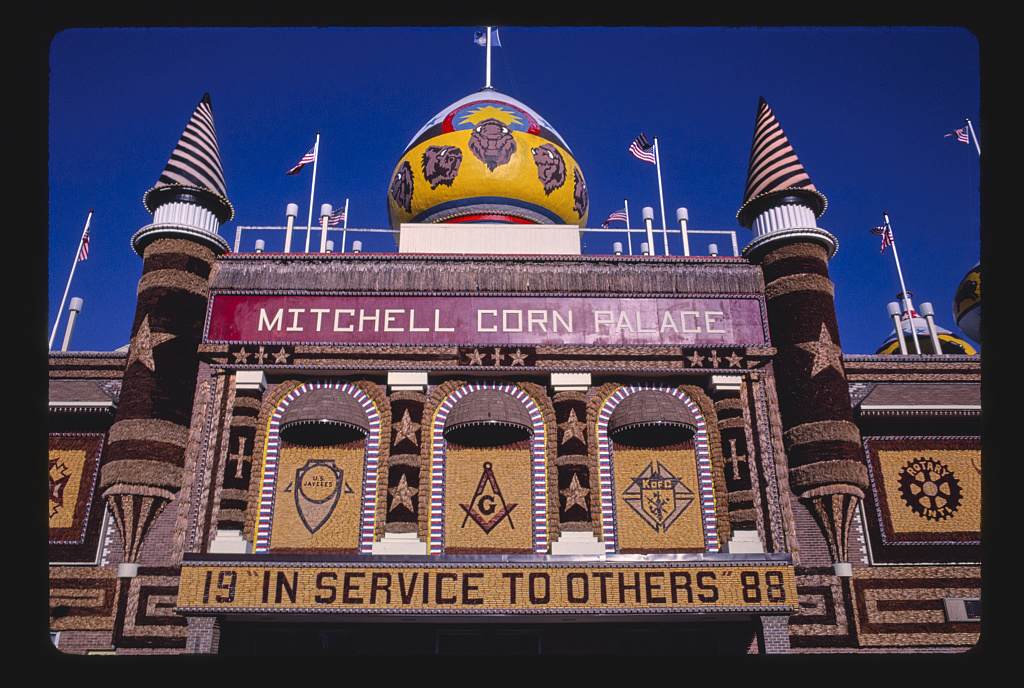 It’s known a few names, like The World’s Only Corn Palace and The Mitchell Corn Palace, but the bottom line is that it’s covered in the crop. Each year a theme is chosen (like Space Age, Western, and even Mother Goose Rhymes), and the 100-year-old palace is decorated with corn murals in different colors and grasses.

This marvel draws around 500,000 tourists each year to gaze at the maize. It’s also a sort of community center for the town, hosting everything from basketball games to farmer’s markets. In case you can’t wait to see it, you can check out their 24-hour live corn camera. 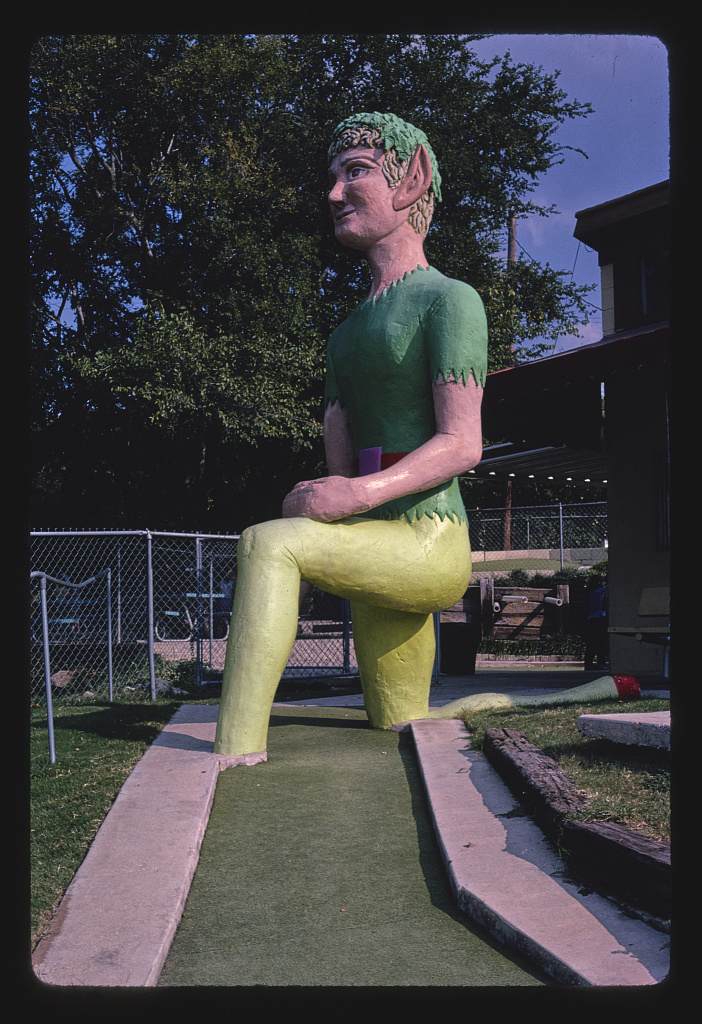 Courtesy of the Library of Congress, LC-DIG-mrg-03403

This mini-golf course has had a modern makeover since John Margolies snapped this shot. Austin artist Cheryl Latimer has since added a boost of color and a sense of playfulness to the figures and sculptures, as well as some creations of her very own. The classic “Old Woman Who Lived in a Shoe” got transformed into a cool Converse, and Peter Pan got vibrant patchwork pants.

The course, which consists of two 18-hole options, was created in the ’40s by the Dismukes family—who still run it to this day. Clearly visible from the popular Barton Springs area, this giant Peter Pan statue and his large T. rex friend have made an impression on passers-by and motorists for generations. 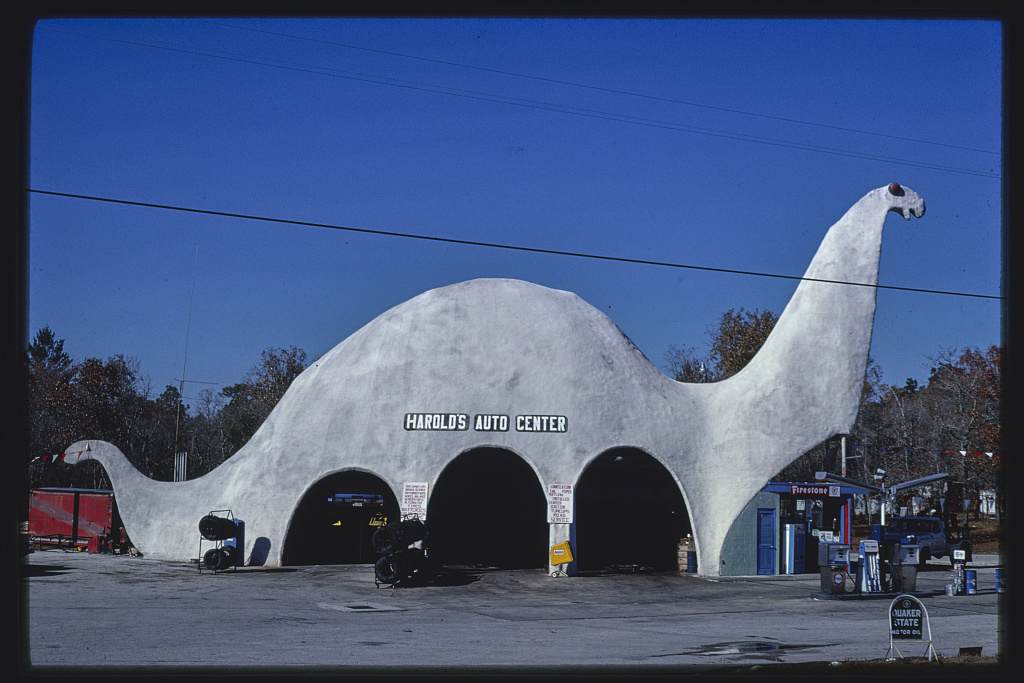 Courtesy of the Library of Congress, LC-MA05- 2

This Nessie-esque building is another fantastic example of an attention grabber that would definitely get us to pull over while driving through town. Originally a gas station, it was owned by the green Brontosaurus-loving Sinclair Oil Company. Today, it’s a full-service automotive shop, and even though they’re in a dinosaur, they say they stay up to date on the latest in repair and preventative care.

The area is a great place for dino fans to check out because Harold’s aptly named Dino, an Apatosaurus that stands 47 feet tall and 110 feet long, isn’t the only one nearby. While stopping at Harold’s, you can travel just a few miles south to find the Pepto-colored Spring Hill Pink Dinosaur. 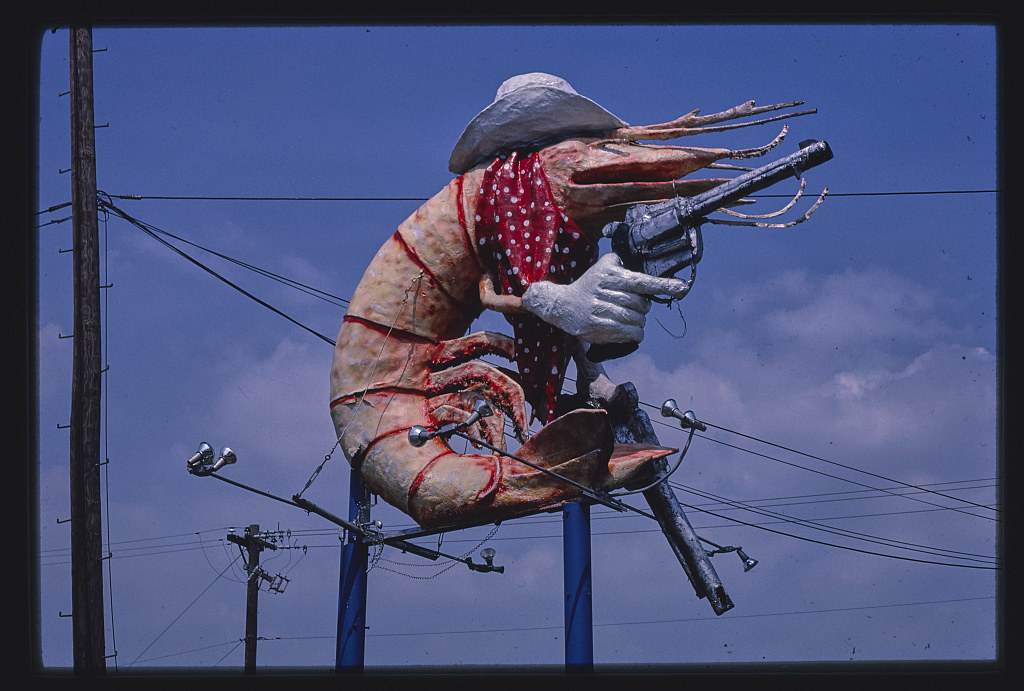 It’s not every day you see a shrimp wearing a cowboy hat and ready for an old-fashioned shoot-out—unless, of course, you used to be a big fan of Christie’s Restaurant. Though the sign didn’t follow them in the move to the Westheimer restaurant row, you can still enjoy seafood at the Houston area’s oldest restaurant. 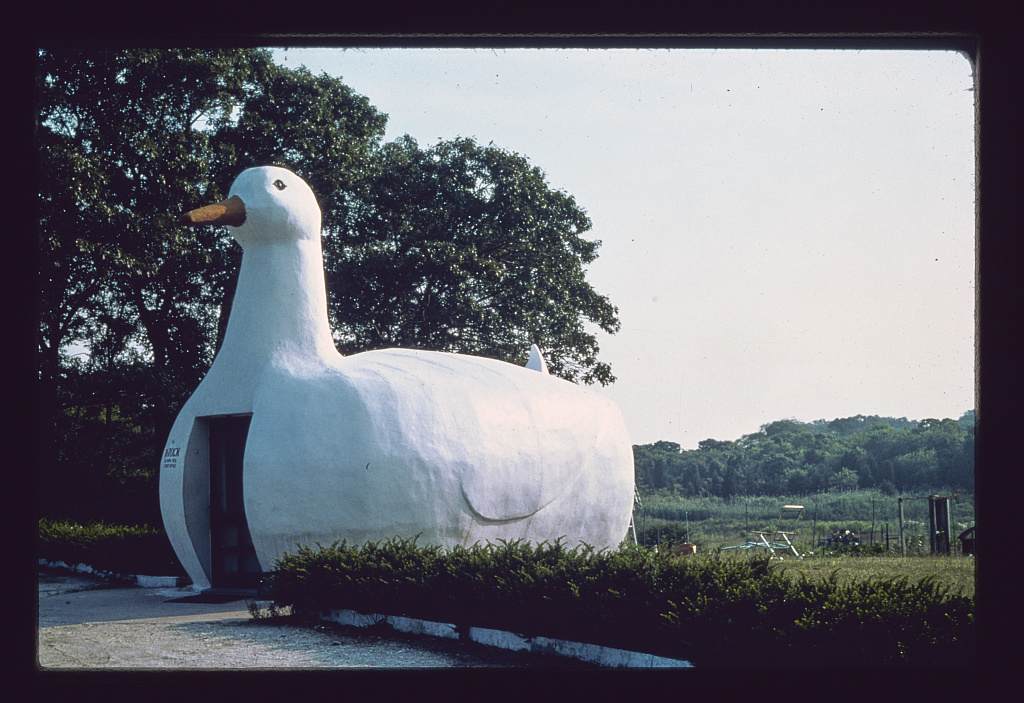 Courtesy of the Library of Congress, LC-DIG-mrg-06708

If you wanted to, you could travel the U.S. looking only at buildings shaped like large animals. We certainly wouldn’t stop you, and you’d have a longer list than most people might think. The Big Duck, of course, would have to be a must-stop on your road trip. Like the hot dog stand that sells frankfurters, this giant bird used to be a storefront for ducks and duck eggs. Some people even use the phrase “Duck Architecture” in place of Novelty Architecture because of the huge impact this fowl has had.

Though many of these brake-hitting roadside attractions are being lost to history, The Big Duck is on the National Register of Historic Places, so he’s not going anywhere. While we’re lucky to have more than 1,000 of these incredible photos of weird roadside attractions, it’s great to keep your eyes peeled for the weird when you’re on your next drive.

By Kelsey Roslin, contributor for Ripleys.com

Zookeepers are sharing the dark hidden truths of what really goes...