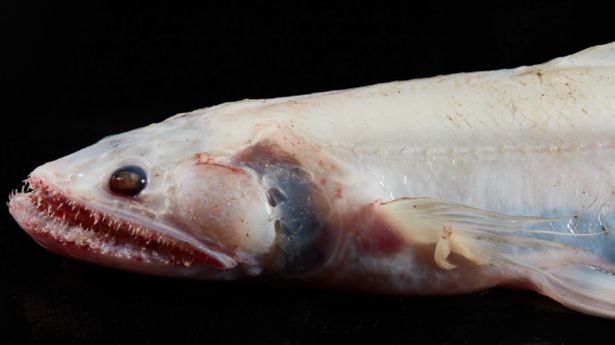 Scientists were left stunned when they found the rarely-seen creatures (

A group of scientists who plunged into the deep blue have discovered new underwater creatures who bare horrifying looks.

The Daily Star reports that scientists from the Museums Victoria Research Institute in Australia were stunned when they discovered bat-like fish, blind eels and lizard fish with rows of razor-sharp teeth.

The never-seen-before creatures were found during an expedition to Australia’s remote Cocos (Keeling) Islands Marine Park, which is an area of 290,213 square miles (467,054 square kilometres) around 1,708 miles (2,750 kms) north-west of Perth, itself in the west of Australia.

The group of scientists, who were collecting samples from over three miles deep, surveyed previously unknown deep-sea life including a blind eel with gelatinous skin that gives birth to live young.

The team were fascinated by the badly developed eyes of the unusual-looking eel and soon discovered another deep-sea creature with rarely-seen attributes.

Here, they found a Highfin lizardfish, which have both ovaries and testes simultaneously.

During the experience, they found a flatfish whose eyes are on one side of its head to retain vision while laying on the seabed.

Flatfish only have eyes on one side of their body
(

Deep sea batfishes that use their arm-like fins to crawl on the ocean floor were also found alongside a Sloane’s Viperfish, which bares a long trail of lights along its underbelly.

Expedition chief scientist Tim O’Hara of the Museums Victoria Research Institute spoke to Live Science about the range of discoveries.

He said: “The fish are the standout deep-sea fashionistas.

“They come in all shapes and sizes, with light organs, lures, rays modified into tripods or camouflage appendages, and huge (or missing) eyes. Each species superbly adapted to the extreme deep-sea environments.

“We have discovered an amazing number of potentially new species living in this remote marine park.”

During the expedition, the team also produced detailed three-dimensional images of the massive mountain underneath the islands, another first for the history-making trip.

The scientists were fascinated by their discoveries
(

“It’s truly an honor to see, for the first time, these stunning features revealed from the deep,” Nelson Kuna, one of two Hydrographic Surveyors on board, said.

Earlier this year, another group of researchers found an extremely rare ‘fish with hands’ spotted on seabed.

The Brachiopsilus dianthus fish, which remained unseen for 20 years, is native to Australia and was found the Tasmanian coast in January after being classified as endangered.

They are also known as pink handfish due to its hand-like fins which it uses to walk along the seabed.

Marine biologist Neville Barrett said of the sighting: “The biggest surprise was finding a pink handfish in the park at a depth of around 120 metres.

“Until this sighting, the species had only ever been recorded four times and was listed as a rare species under Tasmania’s Threatened Species Act.”

Tesco worker shares hack that gives you three times as much...

Inside world’s most haunted forest – entire communities vanish and UFO...