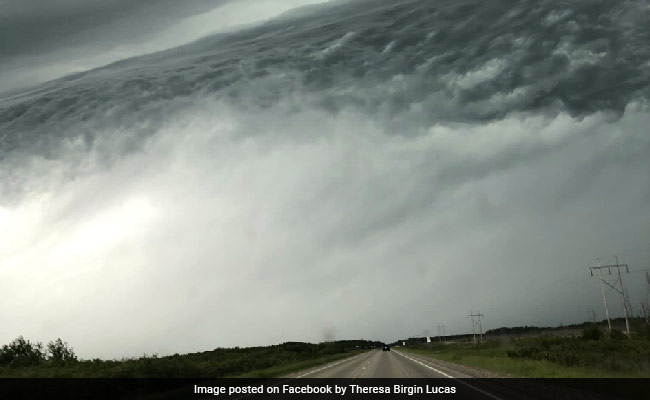 The image looks like ocean waves crashing down into the sky.

A woman in the United States recently captured an incredible cloud formation that appeared to look like an ocean in the sky.

Speaking to KVRR, Theresa Birgin Lucus said that she was driving toward the town of Bemidji in Minnesota after a long week in Rochester when storm clouds began rolling in. She revealed that she snapped a photo of the road to show her daughter how far away she was from her home.

It was one of the quickest pictures she had ever taken and she didn’t even look at it until she got home. But Ms Lucus’ daughter saw it and said how cool it turned out. This is when she decided to upload the picture on social media, where it immediately went viral.

Take a look at the mesmerising photo below:

“It seriously looks like the sky is going to unzip,” Ms Lucas said while describing the image.

The woman was able to capture the incredible storm clouds that create a mind-bending illusion. The dramatic image actually looks like ocean waves crashing down into the sky.

Since being shared, the picture has taken the internet by storm. Social media reaction has been mixed. Some users wondered if it was photoshopped, while others were just left in awe of the seascape in the sky.

“Such an incredible picture you captured,” wrote one user. “This looks equally amazing and horrifying!” added another. A third user said, “That is just CRAZY ! ! ! It looks like the road is just headed straight into the ocean! That is a really COOL PICTURE !”

“I was just lucky to be in the right time at the right place. Not sure why but I was!” Lucas told Fox35 News. She also revealed that she has since entered the photo into a contest at the Minnesota State Fair, where hopefully it will get the prize that it deserves.

How to Hire Excavation Contractors

Taking Responsibility After an Accident as a Cyclist

You May Be Storing Vegetables The Wrong Way In Your Fridge

‘I chose not to tell my family I was pregnant until...

Man Attempts To Show What Reading With Dyslexia Is Like