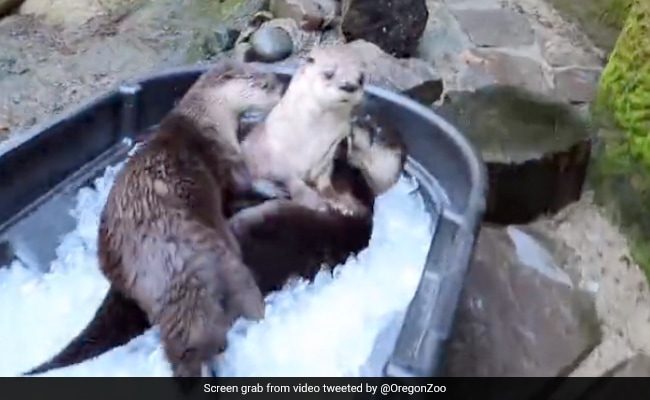 These otters came to the facility as rescues, unable to survive alone in the wild, as per the Oregon Zoo.

An adorable video of three North American river otters is gaining traction on social media. It shows the beautiful creatures frolicking in a bucket of ice.

The video was posted on Twitter by the Oregon Zoo in Portland on June 17. It has received more than 57,000 views and over 4,000 likes on Twitter so far.

According to Storyful, the video shows otter named Tilly and her two adopted pups, Flora and Hobson. They are seen diving and wiggling in the ice, chomping on cubes and wrestling one another.

These animals came to the facility as rescues, unable to survive alone in the wild, according to the Oregon Zoo.

North American river otters typically reside in the Pacific Northwest and survive on fish and other marine life in lakes and rivers in the region. Storyful said that their names came from three bodies of water in Oregon: Floras Lake, Hobson Creek, and Tillamook River.

The otters are intriguing to watch, and many Twitter users posted beautiful comments on the video.

“We all need to have this much fun,” commented a third one.

Last month, a video of a one-day-old wild sea otter sleeping on its mother’s belly went viral on social media. The 36-second clip first appeared on Reddit and showed a mommy sea otter and her newborn snuggled up while floating on crystal-clear water.

‘I banned my mother-in-law from our home after she installed hidden...

Store ‘Closed Down’ For Putting Googly Eyes On Fish To Make...