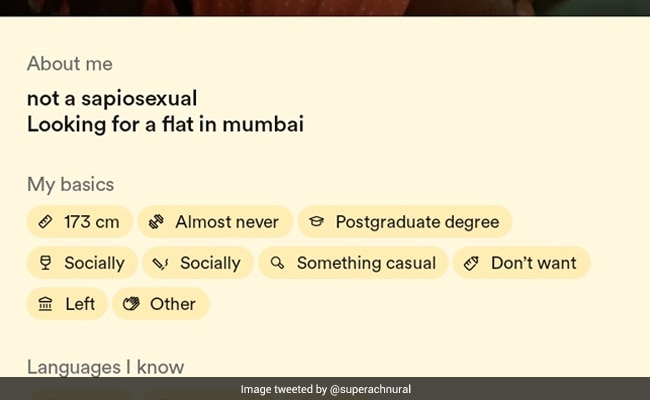 The post garnered more than 2,700 likes and hundreds of comments and retweets.

A Kerala man’s dating app profile has gone viral on social media because of how he chose to use the platform – not to find a date but a place to rent in Mumbai.

A Twitter user shared screenshots of the man’s Bumble profile. “Not a sapiosexual. Looking for a flat in Mumbai,” the man’s bio read. In the following screenshot, the man even mentioned that users should swipe right on his profile if they are in Mumbai and comfortable in helping him to find a place near Western Line since he does not speak Hindi.

no YOU’RE looking for a soulmate on bumble, he’s looking to rent a place in bombay pic.twitter.com/s9dfzM3Xfv

He also added that the quickest way to his heart is, “to send me leads of non-brokerage properties in Andheri.” But, in the next line, he mentioned that he will not judge a user if they ask him for brokerages.

The screenshots were shared by Twitter user Ana de Aamras who wrote, “no YOU’RE looking for a soulmate on Bumble, he is looking to rent a place in Bombay”. Since being shared, the post has gone viral and several Twitter users have been left impressed with the man’s ingenuity.

One user wrote, “Dude has a better chance of finding a soulmate on Bumble than a good flat in Bombay”. “On Bumble, many search for a place in heart, but he is searching for a place in a flat,” said another.

A third user wrote, “Having lived in Bombay for 1.5 years now, I 100 per cent respect this.” “Starting to think I’m using my Bumble profile for the wrong reasons,” added fourth. A Twitter user even said that she would like to try this strategy in Singapore.

The social media post has garnered more than 2,700 likes and hundreds of comments and retweets.

Just Eat Offering Double Discount Which Means You Could Get A...

Simple Test To Find Out If You’re Sleep Deprived