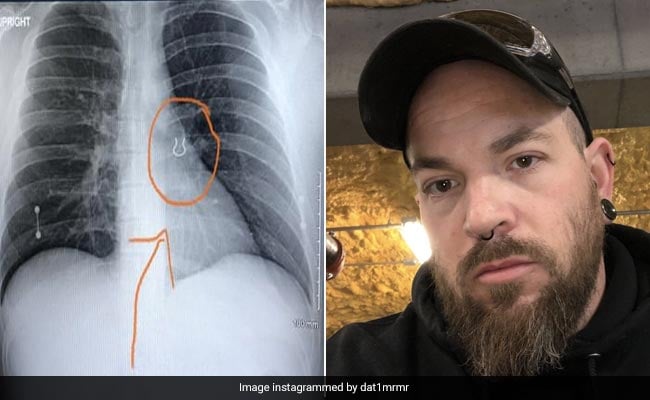 The nose ring was detected in an X-ray.

A piercing enthusiast in the US discovered a nose ring he lost five years ago at an unusual place – his lung. Till now, 35-year-old Joey Lykins assumed the ring had fallen out when he was sleeping. But he didn’t know that it was lodged in his lung all these years, according to a report in New York Post. He had given up and replaced the nasal ornament, the outlet further said. Mr Lykins has 12 other piercings and has kept the current one as a souvenir.

“I thought maybe I’d swallowed it. I looked everywhere. I flipped the bed over. I did everything,” he was quoted as saying by the Post.

The man rediscovered the ring in a painful way. One night, he woke up coughing really hard. “I was coughing so hard that my back was starting to hurt,” Mr Lykins said. “I felt like something was blocking my airways, and I thought I was sick.”

He was taken to a hospital where the doctors initially thought these are the warning signs of pneumonia. But the X-ray shocked them after the results showed a 0.6 inch nose ring embedded inside the upper left lobe of his lung.

“I had an X-ray and the doctor came in and showed me the picture and said ‘does this look familiar?’ I was like ‘you’ve got to be kidding me? I’ve been looking for that’,” he told UK-based Metro. The man was lucky that the ring did not puncture his lung.

Mr Lykins has kept the X-ray images as proof for those who cast doubt about the entire thing. He also has photographs from the surgery which show the ring being extracted from inside him.

“I kept it as a souvenir, I won’t be wearing it again,” he was quoted as saying by Metro.

You Can Now Get Jewellery Inserted INTO Your Eyeball – Any...

Woman thinks she’s been burgled after her dog destroys sofa and...