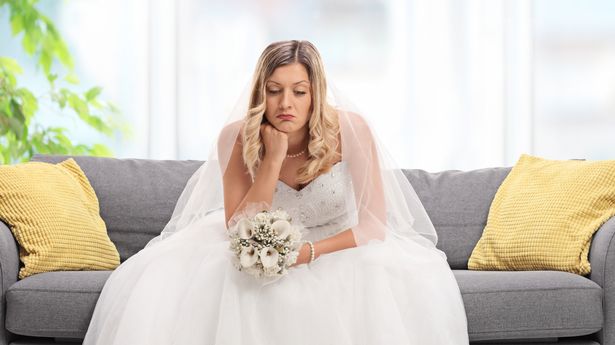 Any wedding takes a lot of planning if you want it to be just right – regardless of budget. From the venue and food menu to floral arrangements, it’s all quite overwhelming.

But there is one element in wedding planning that is exclusively the bride’s and is absolutely sacrosanct – the wedding dress. It is such a personal choice. Others may have their opinions, but at the end of the day, the wedding gown must be the bride’s decision.

Well, you would think so. But one soon-to-be-wed woman is learning the hard way that her future mother-in-law has a lot to say about her frock and has gone to extreme lengths to get her own way.

The young woman is fuming at the relative’s interfering and, in exasperation and with no support from her fiancé, has shared her predicament on Reddit.

‘I fine my son £50 if he gets bad grades, he improved dramatically overnight’
She is furious with her husband who seems to be taking his mum’s side (stock photo)
(

The woman explained: “My fiancé, 33, and me, 28, are getting married in December. His mom [sic] is the intrusive type but she’s nice overall and we somewhat get along.”

“I hate to admit that wedding planning has been an absolute nightmare. His mom [sic] wasn’t willing to agree on most things, and my fiancé said that since he’s her only son then I should respect and appreciate this ‘vision’ she has for the wedding and how it should be.”

If you think that was bad, it’s about to get a whole lot worse: “She insisted coming along for wedding dress shopping. I took her with me and my mom [sic] and friends.”

The woman was delighted to find the perfect dress. Unfortunately, it didn’t fit into her mother-in-law’s ‘vision’.

“She picked a dress that she liked so much and said that ‘she always pictured her son’s bride in it’. My mom and friends thought this line was creepy. I thought the dress was somewhat creepy and toooootally [sic] not my type.

“I apologized [sic] and thanked her for her ‘vision’ but told her that I’d already decided on a dress that I had ‘envisioned’ myself wearing at my wedding!”

In the face of such a strident mother-in-law, the woman tried to stand her ground, but her relative was not having it and even had a moan to her son about his fiance’s behaviour.

“She got all p***y because of it apparently. My fiancé came home in the evening ranting about how I made his mom upset and ‘turned down’ her help in choosing the wedding dress and excluded her from the process.”

Her fiance’s jaw-dropping defence of his mum bewildered her: “It’s my wedding dress so I really didn’t get how she should get a say at all!. He got upset and said that this attitude of mine isn’t working on him or his mom.”

After arguing, the couple dropped it – but the bride-to-be could not have prepared for the bombshell that was about to drop.

“Yesterday I came home and found out that he had returned my wedding dress and replaced it with the one his mom wanted. I called him and he was straightforward about what he did and why he did it.

“I lost it and started screaming at him. He asked me to calm down and really give this dress ‘a chance’. I refused to even listen. He got home and we had an argument.

“I then went to stay with one of my friends and he kept calling and calling then texting saying that I overreacted and it’s his wedding too so it wasn’t cool how I screamed at him. He insisted I give this dress a chance. He went on and on about how his mom has a ‘vision’ and good intentions and just wants what’s best for me as her future daughter-in-law.”

If her ‘vision’ was trying to endear her to her son’s bride, she went about it the wrong way as the wedding arrangements were left hanging by a thread.

“Is it too much for me to be able to pick my own wedding dress without being guilted about it just to keep the peace?” she asked.

Thousands of commenters were seething on her behalf, as one wrote: “Hand him the ring back. Say, ‘I hope you get the wedding you and your mom have always hoped for’, then walk away.”

Another angry person said: “If your fiancé isn’t willing to stand up for you and himself, you will have to get used to having her running your lives from here on out. This dynamic isn’t something that’s going to go away with the wedding”.

Similarly, another commented: “Your fiancé has already revealed where he places the relative importance of your opinion compared to his mothers.”

Woman finds hidden box when doing up kitchen – but has...