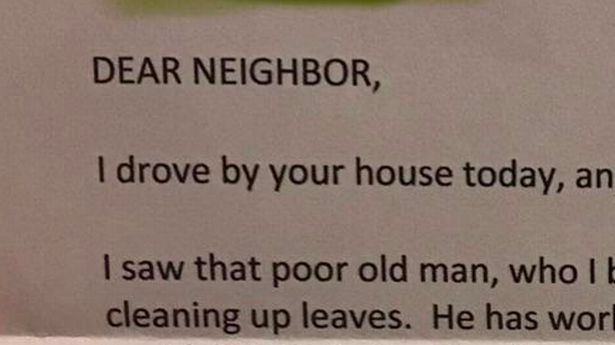 A woman found herself in a tense neighbourly spat after receiving an angsty note in her mailbox, where she was slammed as “shameful”. The anonymous note blasted the homeowner for allowing the leaves from her garden to blow onto her elderly neighbour ‘s lawn – who is forced to clean up the mess “every day”.

Sharing the peculiar note to popular forum Reddit, the woman claimed the situation was helpless as works all day and “can’t control where the wind blows”. The note read: “DEAR NEIGHBOUR, I drove by your house today, and then by your neighbours – The Wilsons.”

The letter continued: “I saw that poor old man, who I believe is 85 years old, working most of the day cleaning up leaves.

“He has worked other days too cleaning up his leaves.

“I couldn’t help but notice that you are allowing the leaves from your yard to blow over onto his yard. Shame on YOU!!!”

Clarifying the situation in the caption, the title of the post read: “Because I work all day and can control where the wind blows.

“Was mailed to me (probably by my neighbour’s wife), envelope postmarked the next town over.”

Since sharing, the post has rocketed in engagements online and has raked in thousands of comments from Redditors.

Flocking to the comments, users shared their shock surrounding the ordeal – with some people claiming that the woman shouldn’t touch the leaves despite the angsty letter.

One person asked: “If it bothered them so much, why didn’t THEY help the old man rake the leaves?!”

A different user penned: “Unless the 85-year-old tells you he has a problem with it I wouldn’t be too worried. If he’s like my grandfather it’s what gets him up out of his chair every day.”

Another user claimed: “Leaving the leaves is literally good for the soil and environment”

“The only time you should worry about the leaves is when they block drainage. Leaves are good for lawns and help them bounce back after the winter frost,” another person agreed.

Do you have a story? We want to hear it! Get in touch at grace.hoffman@reachplc.com

ASOS Black Friday 2022: Best deals from Nike, Topshop and more with up to 80% off

Matt LeBlanc Reveals He Stole Props From The Friends Set

Hairdresser shares why she’d never sleep with wet hair – and...

Space Changes Astronaut’s DNA So He Is No Longer Identical To...