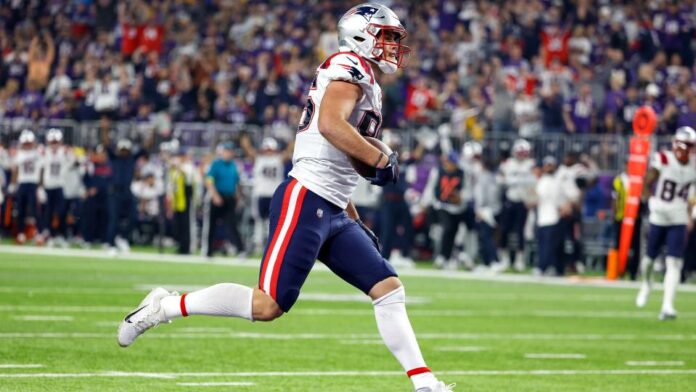 Every now and again, the NFL’s rules on completed passes move back into the national spotlight with a controversial call by officials. They moved back under the glare on Thanksgiving evening.

It appeared that Hunter Henry had hauled in a 6-yard touchdown pass from Mac Jones to give the Patriots a 29-23 third-quarter lead over the Vikings. But hold everything. Before the Pats could attempt the PAT kick, officials reviewed the catch (scoring plays are automatically reviewed) and determined that the pass was, in fact, incomplete.

Upon further review, it appeared that Henry had his hands around the side — possibly slightly under — the ball and reached across the goal line. But when he hit the ground, the ball was jarred loose and popped up into his chest.

Do you agree with this being called incomplete?
pic.twitter.com/OZ8XT7AZAe

New England settled for a field goal to go up 26-23. Minnesota eventually rallied to win 33-26.

Why, then, was the touchdown called back? Here’s the best possible explanation.

Why was the Hunter Henry catch overturned?

There are several stages to the NFL rule on catches.

The first is that the ball is secured in the hands or arms before the ball touches the ground and the player touches the ground with both feet or any part of his body other than his hands. The player then has to perform an act with the ball, like extending the ball forward, which Henry did as he reached for the goal line.

There are also a few notes that come into play. One is that the movement of the ball doesn’t result in a loss of possession. If a player secures the ball and the player touches the ground inbounds, but doesn’t perform a football motion, the pass can be ruled incomplete if the ball hits the ground before he regains control.

There are other aspects of the catch rule, but those are the notes that would apply to the Henry play.

NBC rules analyst Terry McAulay said on the broadcast that the pass was incomplete when the ball was jarred loose after Henry hit the turf. Based on the review, ruling, it would appear that officials also believed Henry did not have had his hands beneath the ball.

There were comparisons social media to a catch ruling for Chiefs tight end Travis Kelce, who completely lost possession of the ball as he reached across the goal line.

NFL is just guessing at this point

Former Cowboys receiver Dez Bryant, who was on the wrong end of a famous non-catch call, had thoughts.

The guy who said that’s incomplete need to shut the hell up!

It’s no way you can call that incomplete

I’m turning this game off SMFH

Bryant was far from the only NFL personality who was stunned by the call of incomplete.

That was a catch by Hunter Henry 🤷🏿‍♂️

That looked like a catch to 90% of the viewing audience, so naturally it’s incomplete

Man, I struggle with this being called incomplete.pic.twitter.com/YCQnOGYcfR

I get if they call it a catch down at the half yard line. But on no planet is that an incomplete pass.

Parents quit their jobs and sell family home to raise their...

Woman sneaks out of restaurant after fiancé demands she pays for...