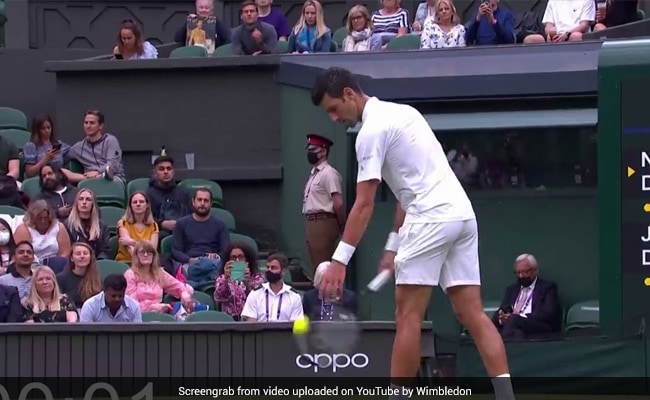 That Novak Djokovic is a tennis legend is now indisputable. Despite knowing the tremendous skill set that the sportsman comes with, fans are left surprised and impressed every time Mr Djokovic takes to the court. The tennis star, who won his sixth Wimbledon title this year, had given his fans a preview of what was to come during his first-round match against Jack Draper. The game was concluded in all of 46 seconds and its clip is now viral on social media thanks to frequent shares. Businessman Harsh Goenka shared a clip of the game recently and Twitter could not stop raving about Mr Djokovic’s skills.

The Chairman of RPG Group wrote, “The fastest tennis game ever?” The video shows Mr Djokvic belt out four consecutive aces in a row, leaving the crowd in awe. Mr Goenka’s post has been viewed over 37,900 times since it was posted.

The fastest tennis game ever? #Djokovicpic.twitter.com/Sa2POJXBYp

Dr Shriram Nene, who is married to actress Madhuri Dixit, also quote-tweeted the video and said that the World No.1 was the “definition of focused”.

Agree! This game was amazing. #Djokovic served back to back aces at over a 100mph. That is the definition of focused. https://t.co/97juusxVWX

One fan even went on to describe the player as the “king of aces.”

Reacting to the tweet, another user said, “Sheer brilliance…”

The clip in question was originally shared on the official YouTube page of Wimbledon on June 29. It has recorded 866,243 views since. The caption to the video reads, “Masterclass in serving from Novak Djokovic as he wins a game in just 46 seconds during his first-round match against Jake Draper at The Championships 2021…”

Reacting to this video, one user who goes by the name Quant Regio said, “It’s funny how Mr Draper just walked from corner to corner.”

Another fan, Pete on Fire, said, “I don’t even know what metronomic means, but yeah… That was metronomic,” referring to how the commentators described Mr Djokovic’s game.

Summing up what most people were feeling, a user named Hung Than said, “As if this guy’s not good enough already; now he’s serving like this.”

Woman Develops Lactating Mass in Her Armpit After Giving Birth

Woman forgets to take off something important for new driving licence