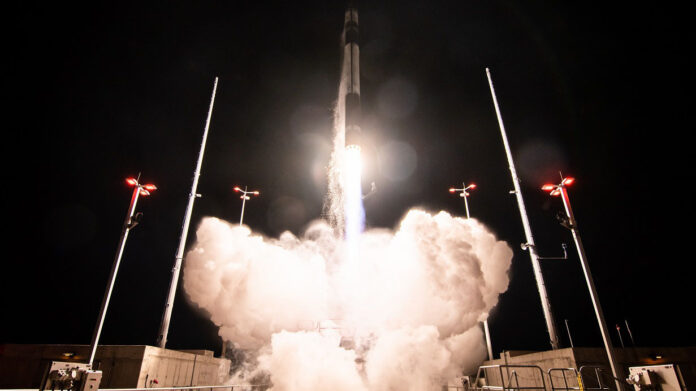 WALLOPS ISLAND, Va.—Rocket Lab’s Electron(Opens in a new window) lit up the skies over Virginia’s Eastern Shore Tuesday night in the space startup’s first liftoff from US soil after 32 launches from New Zealand.

The mission that Rocket Lab christened “Virginia is for Launch Lovers”(Opens in a new window) began at 6 p.m., about 12 minutes after a final go/no-go poll among flight controllers cleared it for flight—and just over a month after high upper-atmosphere winds forced a scrub of a Dec. 18 launch attempt.

The compact, two-stage Electron, just 59 feet tall, instantly became the brightest object in a clear, cold sky as the steady rumble of the rocket’s nine kerosene-fueled first-stage engines rolled across the shore.

The rocket stayed visible through first-stage separation as it arced overhead, tracing a path through the arms of the constellation Orion; people around Washington, D.C., some 111 miles northwest, could see it(Opens in a new window) if they looked in the right direction.

Rocket Lab, founded in New Zealand and now based in Long Beach, Calif., had staged its previous Electron launches from Mahia, New Zealand. It picked Wallops, home to a NASA center(Opens in a new window) and Virginia Space’s Mid-Atlantic Regional Spaceport(Opens in a new window), as its second launch site in 2018 (in part to position itself for national-security launches that must start from US soil) and has since begun constructing a plant here to assemble its next-generation Neutron rocket.

Cat’s out of the bag when TSA finds stowaway feline at...