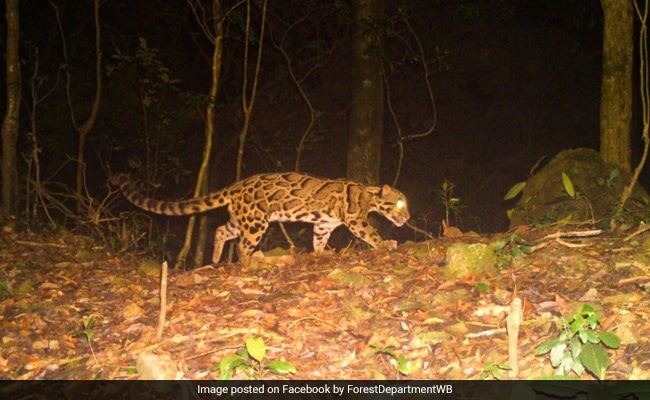 Buxa Tiger Reserve was created in 1983 and got the status of a national park in 1992.

The forest department of West Bengal shared the photograph of a clouded leopard, a rare sighting of one of the most ancient cat species. The photo, clicked at the Buxa Tiger Reserve, was posted by the forest department on its Facebook page on the occasion of International Clouded Leopard Day on August 4. The leopard has been listed as vulnerable species by the IUCN red list due to a huge decline in its population. Less than 10,000 clouded leopards are believed to be living in the wild.

“Clouded Leopard (Neofelis nebulosa) is a big cat species found in India. Its range is very limited and only in a few pockets of dense forest it has been documented in the country. Buxa is one such place where you can find clouded leopards also. There have been many pictures captured by camera traps in recent times. Sharing one such clear camera trap picture captured recently from Buxa Tiger Reserve,” the West Bengal forest department said in the caption of the photo uploaded on Thursday.

The photo of the majestic big cat was liked by many social media users, including Indian Forest Services (IFS) Parveen Kaswan, who reshared it.

The clouded leopard population experienced a sharp decline in the second half of the 20th century as a result of poaching and deforestation. They are said to be nocturnal, arboreal, and predators of small mammals.

According to West Bengal Tourism Department, the Buxa Tiger Reserve was created in 1983 and got the status of a national park in 1992. The tiger reserve has been set up in in an area of 759 square kilometres. Its name has been derived from Buxa Fort.

The reserve is rich in biodiversity and has a great collection of rare orchids and medicinal plants. Owing to inaccessible terrain, some parts of Buxa hills in the Sinchula range are still unexplored. The generic diversity of mammals here is second highest among all tiger reserves of India.

The bio-diversity of animals comprises of a rich avifauna of more than 230 identified species, 67 mammals and 36 species of reptiles including both endemic as well as migratory species, the tourism department said on its website.

‘My colleague has picked her baby name but she doesn’t know...