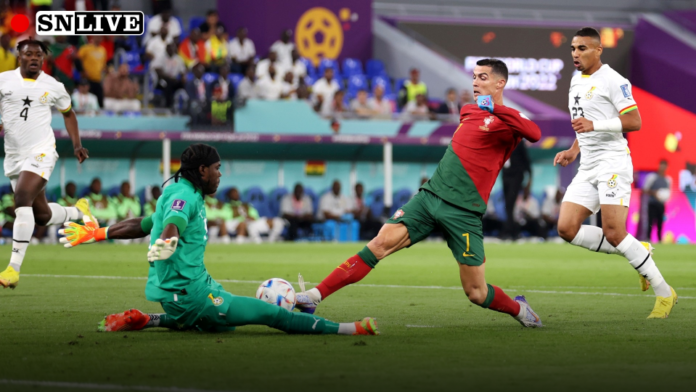 All eyes will be on one man when Portugal take on Ghana in Group H at Stadium 974, with Cristiano Ronaldo set to once again dominate all the attention.

The Portugal icon comes into the match looking to put a troubled week behind him with his, and his country’s, build up to what will surely be the 37-year-old’s last tilt at World Cup glory disrupted by the fallout from his acrimonious Manchester United exit.

Ronaldo can rarely stay out of the headlines for long, but he must now hope that his on-the-pitch exploits are what draw the focus as Fernando Santos’ side seek to better their run to the Round of 16 in Russia four years ago.

Ghana will present no pushovers. The Black Stars have a squad filled with talent and plenty of stars of their own — not least Arsenal’s Thomas Partey — and they look arguably the most capable of all the African challengers.

The Sporting News is tracking live scoring updates and highlights for Portugal vs. Ghana at the 2022 World Cup. Follow below for complete results from the Group H match in Qatar.

MORE: Where next for Cristiano Ronaldo?

45 mins: Mohammed Kudus is the first yellow card of the evening, going into the book for a high challenge on Joao Cancelo. We’ll have just the two minutes of added time.

44 mins: Portugal’s fullbacks have been their best attacking threat in this first 45 minutes, Joao Cancelo whipping in a promising low cross that is fractionally behind all his attacking players. The Portuguese regain possession but Otavio gets his ball in all wrong, sending it high over the crossbar.

42 mins: Portugal have huffed and puffed in this first half, and Ronaldo is encapsulating their frustration. Here he has a shot blocked, before inadvertently getting in the way of Raphael Guerreiro’s header from Bruno Fernandes’ cross.

38 mins: A first spell of pressure for Ghana as they win a couple of corners in quick succession, but the delivery isn’t the best on either occasion and any hope of retrieving the situation is halted by the referee’s whistle.

35 mins: Portugal are continuing to do more of the pushing, although Ghana do look relatively comfortable at the back. This latest effort is typical of their attacking, Otavio trying an optimistic effort that Lawrence Ati-Zigi is able to get right behind.

31 mins: Ronaldo has the ball in the net! Oh, but the whistle goes almost immediately, as a push is awarded for his challenge on Alexander Djiku that gave him the shooting chance. It did look like a shove, although it’s a close call. As clinical a finish as you’d expect, though.

28 mins: That’s a decent chance for Joao Felix, but his finish is wild as he leans back and the ball sails harmlessly wide. Manchester City pair Joao Cancelo and Bernardo Silva had combined to good effect down the right to create the opening.

25 mins: Left-back Raphael Guerreiro looks like being a key outlet for Portugal going forward tonight. No less than 60% of their attacks so far have come down that flank, compared to 20% down the middle and 20% down the right.

21 mins: The pattern of play is well and truly set now, with Portugal dominating both ball and territory. They’ve had 67% of the ball in this first quarter and four attempts on goal; Ghana have yet to manage one.

17 mins: There’s no escaping Ronaldo is there?

Will this World Cup be Ronaldo’s last? 🤔 #ITVFootball | #FIFAWorldCup pic.twitter.com/JVwAGYBh0I

13 mins: Another chance and once again Ronaldo can’t capitalise. Portugal take a corner quickly and Ghana are caught cold, Raphael Guerreiro getting the space down the left to measure a ball towards the far post… where Ronaldo rises highest only to nod wide!

Ronaldo went 🆙 for this 😳 pic.twitter.com/Jr5MQgCw0F

11 mins: There’s the first chance of the night, but incredibly Ronaldo’s touch isn’t what it might have been and Lawrence Ati-Zigi is able to make a brave save at his feet. Mohammed Kudus had dwelled on the ball in midfield and Portugal were quick to pounce, Bruno Fernandes splitting the defence to play in Ronaldo.

8 mins: Portugal are monopolising possession in these first few minutes, knocking the ball around at will and looking to stretch the Ghana defence. No clear chances as yet but they’ve had almost 70% of the ball to date.

5 mins: That’s our first effort of the game as Ghana fail to fully clear a corner and the ball falls for Otavio just outside the area, but the Porto midfielder snatches at the shot and it drifts well wide.

2 mins: You’d have got fairly long odds on Ronaldo’s first contribution being a foul but so it proves, the Portugal captain conceding a free-kick for a trip on halfway.

KICKOFF: Ronaldo gets the ball rolling and we’re off and running in this Group H opener.

3 mins from kickoff: The teams are in the tunnel before emerging on to the pitch. Kickoff at Stadium 974 is moments away.

An emotional Ronaldo listens to the Portugal national anthem playing at the 2022 FIFA World Cup for the first time 🇵🇹🇵🇹 pic.twitter.com/za8SOet71k

5 mins from kickoff: A few bits of housekeeping just before we get started.

This is Portugal’s eighth World Cup appearance and a sixth in succession – they have featured in every finals since 2002. They finished fourth in 2006, their best achievement since reaching the semi-finals on debut in 1966, and lost to Uruguay in the last 16 four years ago.

Ghana missed out on Russia 2018 but are making their fourth appearance in five World Cups. They got to the round of 16 in 2006, their tournament debut, and the quarter-finals in South Africa, although most recently they failed to get out of their group at Brazil 2014, losing two of their three games.

10 mins from kickoff: There’s a few Ronaldo fans in the house this evening!

Cristiano Ronaldo receives a LOUD ovation as he takes the field 🇵🇹🔥 pic.twitter.com/wSzi3DKOJz

15 mins from kickoff: Portugal look like they mean business…

25 mins from kickoff: Portugal were 2-1 winners against Ghana in the sides’ only previous meeting, on Matchday 3 of the 2014 World Cup in Brazil. John Boye’s 31st-minute own goal put Portugal in front and, though Asamoah Gyan levelled 12 minutes into the second half, Cristiano Ronaldo struck ten minutes from time to settle the contest – although neither side progressed from Group G with Germany and the USA taking the two qualification slots.

30 mins from kickoff: There’s never a shortage of Ronaldo stats, but this one is a belter!

🤯With his 117 international goals, Cristiano Ronaldo has scored more on his own than the entire 26-man squads combined for 1⃣5⃣ different teams at this year’s #FIFAWorldCup. pic.twitter.com/5MrA9dlfo3

40 mins from kickoff: No prizes for guessing who’ll take the headlines today, whether he scores or not…

50 mins from kickoff: Ajax’s Mohammed Kudus starts for Ghana, with Andre Ayew leading the line ahead of Inaki Williams. Fellow recent call-up Tariq Lamptey is on the bench.

55 mins from kickoff: Yes, as everyone expected, Cristiano Ronaldo is fit after illness and captains Portugal. Signs are he’ll play with Joao Felix up front with Bernardo Silva in just behind and Bruno Fernandes and Otavio in advanced midfield roles in what looks a very attacking lineup.

Nuno Mendes hasn’t recovered from a knock so Raphael Guerreiro starts at left-back with Joao Cancelo on the right of defence. Pepe is also missing, leaving Danilo Pereira to partner Ruben Dias in central defence.

1 hour 5 from kickoff: We’re not far away from official team news being confirmed now, although Cristiano Ronaldo does look set to captain Portugal here.

1 hour 20 from kickoff: Inside the Portugal dressing room just before the players arrive; love the lighting and those shirts are looking FANTASTIC!

1 hour 25 from kickoff: Decent atmosphere among the Ghana contingent!

2 hours from kickoff: Portugal are without a win in their last three World Cup openers (D2 L1) but they’re feeling confident for this one.

2 hours 20 from kickoff: If you’re looking for some advice when it comes to putting a bet on for this match then we’ve got you covered.

And no, the picks aren’t just Ronaldo to score anytime.

3 hours from kickoff: It’s set to be a tricky afternoon for Ghana after winning just three of their 14 internationals throughout 2022 (D5, L6 – including friendlies), Ghana enter the World Cup in poor form.

Given that form, the African nation are now ranked 61st in the world by FIFA, their worst ranking since being 77nd all the way back in 2004.

3 hours 50 from kickoff: So if you’re wondering what we’re on about in terms of Ronaldo dominating the headlines of late and you’ve been living under a rock these last few weeks, let’s fill you in so you’re up to speed.

Earlier this month, Ronaldo gave an explosive interview to Piers Morgan in which he criticised the club owners and his manager Erik ten Hag.

United made it clear they weren’t happy with the comments and just a few days later the club announced they had mutually agreed to terminate his contract.

4 hrs 30 from kickoff: Hello, and welcome to The Sporting News’ live coverage of the Group H clash between Portugal and Ghana. This one looks set to be dominated by one man, with Ronaldo likely to get all the attention. But will Ghana upstage him and pull off a shock? Let’s find out!

Fernando Santos faced a bit of a coin toss for his starting goalkeeper and Porto’s Diogo Costa got the nod over long-serving No.1 Rui Patricio. Danilo Pereira started ahead of veteran defender Pepe leaving Ronaldo as the sole cap centurion in Portugal’s starting XI.

Paris Saint-Germain’s Nuno Mendes missed out, leaving Raphael Guerreiro at left-back with Joao Cancelo in the other full-back position.

Both Kamaldeen Sulemana and Daniel Kofi Kyereh have been named in Ghana’s World Cup squad despite injury concerns, although neither started. Inaki Williams did get the nod, with fellow recent call-up Tariq Lamptey starting on the bench.

Watch the match on fuboTV in USA

Visitors To Japanese Theme Parks Will Be Asked Not To Scream...