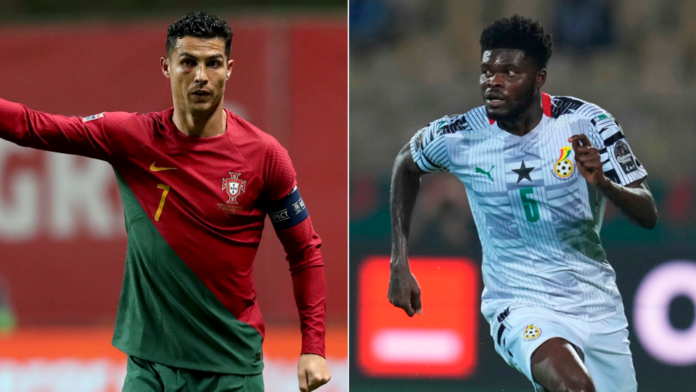 Cristiano Ronaldo hopes to start his World Cup on a better note than his rival Lionel Messi as Portugal take on Ghana to begin Group H play.

Messi and Argentina shockingly fell to Saudi Arabia in their 2022 World Cup opening match, and now Ronaldo will hope to avoid the same fate against a historically pesky World Cup opponent.

The only other time these two teams met, Ronaldo scored an 80th minute winner as Portugal emerged with a 2-1 victory, but it wasn’t enough as both teams were eliminated from the 2014 World Cup group stage behind Germany and the United States.

Now, instead of closing group stage play, the two will begin it with an eye towards setting themselves up for a big knockout stage push, knowing Uruguay and South Korea also loom in a very difficult group.

The odds show ninth-ranked Portugal as a major favorite over Ghana, who sit ranked just 61st in the world.

The odds also show a clear expectation that Portugal will keep Ghana scoreless, with a big swing towards both teams not to score. There is confusion, however, whether Portugal can score enough goals to trigger the over.

Portugal vs. Ghana: 3 things to know

Portugal are missing three players from the World Cup squad due to injury, but none bigger than Liverpool forward Diogo Jota who was in good form before succumbing to a serious hamstring injury in early October. They are also without Wolves winger Pedro Neto (ankle) and Leicester City defender Ricardo Pereira (Achilles).

Stade Rennes winger Kamaldeen Sulemana was a question mark coming into the tournament after missing time with an ankle injury, but since being named in the Ghana squad it’s been all quiet, indicating that he’s likely to play. The Black Stars did lose goalkeeper Joe Wollacott, however, after he cruelly sustained a finger injury in a pre-World Cup friendly.

MORE: Full injury tracker for all 32 teams at the 2022 FIFA World Cup

I’ll be completely honest, this game could feasibly end up a number of different ways. I probably would advise steering clear of this match altogether first and foremost, but a low-scoring Portugal win is probably the most likely result.

While I’m not at all confident about how this game will play out, here are a few selections that could be worth a punt.

It’s entirely possible that Portugal completely blow a young and inexperienced Ghana side out of the water in this opening match.

Yet that’s not really what Portugal are about, and it’s also not really how the World Cup often plays out. With respect to England putting six goals past Iran, often in the World Cup teams, especially defensive-minded ones like Portugal, will take their time looking to break down lesser, bunkered in opponents.

Given that Portugal are without Diogo Jota and Ghana have a minimal attacking unit led by two aging stars, this shapes up to be a slogfest.

While it was surprising doing research to find that these two teams aren’t exactly the card machines their reputations might lend, this match still shapes up to be a disciplinary nightmare, especially if it proceeds in the low-scoring manner predicted above.

Ghana’s inexperience will play a significant role here, and they could resort to kicking Portugal’s best players like Ronaldo, Joao Felix, and Bruno Fernandes. Additionally, Joao Palhinha is a walking yellow card given the physical and aggressive nature of his midfield play.

American referee Ismael Elfath didn’t exactly let the cards fly this past MLS season, but he still managed to produce 4.82 yellows a game, seventh-highest in the league, and that came with officiating more LAFC games than any other team.

‘My bridesmaid is demanding I buy her a second dress –...

Expert advises five top tips to staging your home on a...

Drug halts the progression of Lewy body dementia in mice