Police officers — whether human or K-9 — are supposedly there to protect and serve the public. As such, it’s always tragic to see law enforcement officials engage in illegal behavior.

Now, many if not most K-9 officers perform their duties admirably, like recently passed URL who was renowned for busting pedophiles. But there are always a few bad apples that spoil the whole bunch.

Wyandotte Police Department (WPD) from Michigan recently launched an investigation into the behavior of one of their K-9 officers. Officer Ice was accused of committing heinous crimes while on duty.

According to eyewitnesses, a fellow officer’s lunch vanished when duty called him out of a break room. Eyewitness accounts state that Office Ice was spotted in the vicinity of the lunch shortly before its disappearance.

“Stealing is not only a crime but it is morally wrong too. … It saddens me to report that a current officer of the Wyandotte Police Department is under investigation for stealing!” WPD said in a statement.

WPD made the case public and released a mugshot of Officer Ice. However, the public reacted unexpectedly to the news — they drew their full support behind the offending officer.

Threatened with public protests, the WPD has caved in and called off the investigation. Officer Ice has reportedly been allowed to return to duty with no repercussions.

A History of Criminal Behavior

The alleged theft happened on January 10 within the facilities of the WPD in Wyandotte, southeastern Michigan. At the time, one Officer Barwig was having his lunch in the facility’s break room.

However, a call for help from the WPD jail interrupted his meal. According to the police, Officer Barwig left his half-eaten lunch on the break room table as he headed to assist with a person in the jail.

“A short while later Barwig and another officer returned to the break room … Barwig’s entire lunch was gone. Disappeared, vanished!” the WPD said.

However, at the same time, the two cops spotted Officer Ice. He was allegedly leaving the break room while “licking his chops.”

This wasn’t the first time Officer Ice had been linked to criminal behavior. The WPD said he had on several occasions taken food “right from a coworker’s hands as they walk by.”

In the past, he has also been accused of “rummaging through trash cans that are within his reach.”

Upon interrogation, Officer Ice pleaded his Fifth Amendment rights and remained silent. He also proved otherwise uncooperative, so the WPD was left with no choice but to launch an investigation.

They snapped Officer Ice’s mugshot and — in order to have him tried by his peers — asked the public’s opinion on his guilt.

‘Eyes that Can Melt Any Heart’

In contrast to what you may have expected, the public was quick to defend Officer Ice. Many people got stuck on the fact that there were no eyewitnesses to the crime itself.

“All circumstantial evidence! Was there a camera in the lunchroom?” one commenter said on the WPD Facebook page.

“Proximity to a crime does not prove guilt. He probably got a drink of water and that was why he was licking his chops,” another speculated.

Although Officer Ice refused to cooperate with the investigation, some members of the public pointed out that he hadn’t done anything to actively hinder it, either.

“At least he didn’t take off running and risk another charge,” a commenter said.

“I am not the kind of woman who normally falls for ‘bad boys,’ but Ofc. Ice has eyes that can melt any heart. If he is convicted and sent off to the big house, please send me his address and I will write letters to him so he won’t be lonely,” one lady gushed.

Faced with the outpouring of support for Officer ice, the WPD has shamefully caved in. On January 18, the department announced that it has officially called off the investigation.

“We have been threatened with massive protests if we move forward with our investigation and/or charges. Plus, the overall public just doesn’t believe he is guilty. No video has been produced,” the WPD said in another statement. 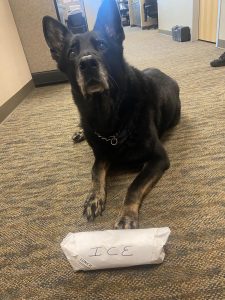 According to the department. Officer Ice will not be facin g any internal disciplinary action or criminal charges. It appears he has been allowed to return to his regular duties.

As if that wasn’t enough, some members of the public have rewarded Officer Ice. Lunch Wyandotte, a local restaurant, delivered a congratulatory custom sandwich to Officer Ice as they felt he wasn’t being fed enough.

They didn’t forget the human officers, though. They also received a complimentary tray of sandwiches.

Maybe they’ll keep them out of Officer Ice’s reach this time so they won’t tempt him to commit yet another crime.

Shoppers are snapping up 1L bottles of Baileys for just £10...

‘My sister-in-law wants us to change our wedding date – it’s...