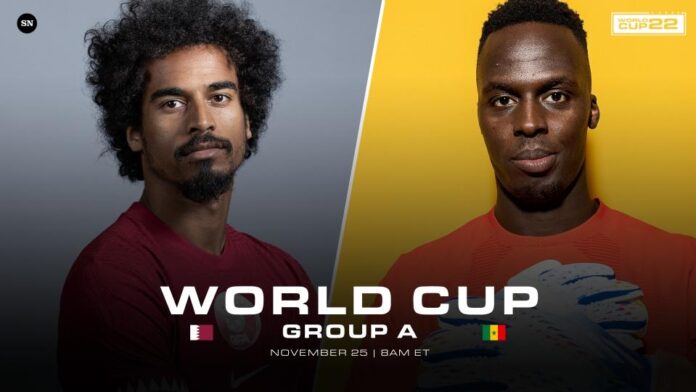 Qatar and Senegal will be facing off in what should be a dramatic Group A match in which the loser could potentially be eliminated from contention by the time the day is done.

Both nations lost their opening match by a 2-0 score, though Senegal’s performance against the Netherlands was arguably deserving of a better outcome. The African champions bossed the game for large stretches, but failed to convert on their chances with the absence of injured star Sadio Mane looming large.

Host nation Qatar, meanwhile, put forth as disastrous a showing as was possible for a national team that had been preparing for over 10 years for the moment to impress the world on its own home soil. It was clear that despite all the preparation the nerves got to them and they never got in the game.

There will be no time for excuses on Friday as the World Cup fate of both teams likely comes down to their ability to get all three points.

Sporting News is tracking live scoring updates and highlights for Qatar vs. Senegal at the 2022 World Cup. Follow below for complete results from the Group A match in Qatar.

MORE: How to bet Qatar vs. Senegal

4 hrs 45 mins from kickoff: There’s some buzz around Senegal’s Illiman Ndiaye and what he might be able to do if given the opportunity. We’ll see if he gets his third cap in this critical World Cup match.

Oh, and Iliman HAS to play against Qatar. Don’t get why he wasn’t brought on after the first goal with 10 minutes remaining. He’s literally what the NT has been begging for years: a creative forward player (besides Mané). pic.twitter.com/w45ibMi37L

5 hrs from kickoff: The reigning African champions Senegal were expected to be one of the top two to advance from Group A, but there’s another scenario that could see it miss out entirely, which would make for a fascinating trend.

Confederations’ Champions record at the World Cup so far:

How the mighty have fallen. 🫣 pic.twitter.com/R4ypL2ONOV

It’ll be fascinating to see what changes Qatar manager Felix Sanchez makes in a bid to save face in this World Cup tournament. There are reports that the first change might come at goalkeeper, where Meshaal Barsham could fill in for Saad Al-Sheeb, who struggled mightily against Ecuador.

For all his experience, playmaker Hasan Al-Haydos was another player who struggled to match the physicality and speed of the Ecuador team. Bringing him off the bench in a must-win vs. Seneglal could be justified should Qatar be chasing the game.

Senegal are likely to bench Chelsea’s Edouard Mendy according to reports, and Cheikhou Kouyate is dealing with a muscle issue.

Apparently the team is also considering playing Sheffield United’s 22-year-old Illiman Ndiaye, who has nine goals in 21 matches in the English second tier this season. He was seen as a potential replacement for Sadio Mane’s do-it-all attacking influence behind the forward. With just two Senegal caps to his name, he was left on the bench against the Dutch.

After both teams lost their opener, only a win will do here, especially for hosts Qatar, who have the prospect of facing the No. 8-ranked Netherlands in the final group matchday.

Senegal will start the match at Al Thumama Stadium as favorites, especially after putting forth a strong performance against the Netherlands despite failing to score in a 2-0 loss. Qatar lost by the same score, but looked overwhelmed by the moment and have something to prove.

Teens ‘Kick And Punch’ Ambulance While Crew Treat Patient Inside

Bride fumes after groom swaps her wedding dress for the ‘creepy’...