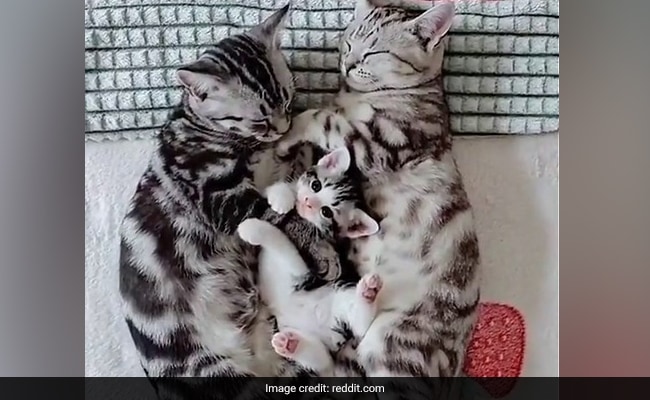 A kitten is disturbing its parents while they are sleeping.

A child, whether human or animal, never goes to bed or falls asleep on time even after repeated requests. A video gaining attraction on the internet shows a kitten doing the same, disturbing its parents while they are asleep.

The video has been shared on Reddit by ‘r/aww’ with a caption, “Kitten doesn’t want to go to sleep.”

The video starts with two cats sleeping and cuddling. The little kitten is safe and well between the kittens. The restless kitten is trying to awake its parents as they are asleep and keeps strolling between them on the bed.
The video has been shared on Monday and since then it has received over 21,000 views so far.

People have loved watching this adorable video and left heartfelt comments on the post.

“Exactly like my daughter when we’re trying to sleep,” a user wrote.

“Proof that babies are the same no matter the species,” commented a second user.

Kittens are delightful to see in person or on screen. Videos of kittens are frequently shared on social media.

Around 7500 BC, cats were first domesticated in the Near East. Cat domestication was supposed to have begun in ancient Egypt, where cats were worshipped from around 3100 BC. In 2021, the world’s cat population was estimated to be 220 million owned and 480 million stray cats.