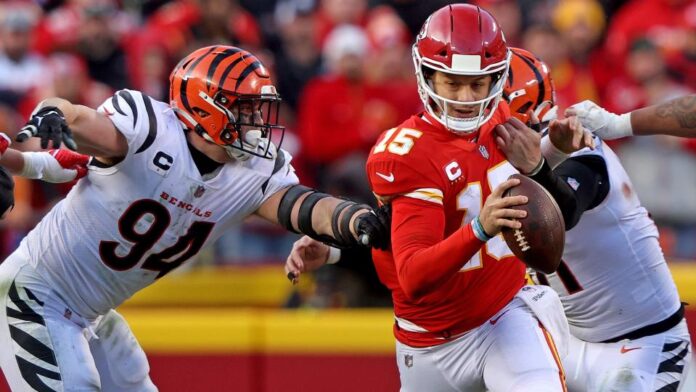 Patrick Mahomes is only 27 years old, but his accolades outweigh his years. In the playoffs, he’s 8-3 in his young career with a completion percentage of 66 percent, 3,381 yards, 28 touchdowns, and seven interceptions.

However, heading into Sunday’s game against the Bengals, the sting of his last playoff game remains fresh. Mahomes threw for just 55 yards in the second half of the AFC Championship Game last year against Cincinnati, after he shredded the Bengals in the first half to the tune of 220 yards and three touchdowns.

He also threw two second-half interceptions, one of which proved to be the death knell in overtime.

As Mahomes gets ready to play the Bengals again, he’ll have to adjust to Lou Anarumo’s defense, which made some amazing adjustments to Mahomes in last year’s playoff victory. It will be interesting to see what Anarumo has in store heading into this week’s game.

Why did Patrick Mahomes struggle vs. the Bengals?

Mahomes’ struggles in the second half of the AFC Championship Game have been traced back to a seemingly simple explanation: Anarumo and the Bengals simply stopped rushing him and instead closed off passing lanes.

By dropping eight men into coverage, although Mahomes had time, he couldn’t find anyone to throw the ball to. They dropped eight into coverage 45 percent of the time in the second half, 21 percent more than they did in the first half.

As a result, the Chiefs managed just three points in the second half en route to a 27-24 overtime loss to Cincinnati.

THE BENGALS PICK OFF PATRICK MAHOMES IN OT
pic.twitter.com/CNZsvijxyy

As a matter of fact, the Bengals only sent more than four players once in the entire game, inside their own five-yard line.

“There was a few misreads here and there,” Mahomes said after the game in January, per NFL.com. “There was guys that were open and I didn’t hit at the right time or I passed up on something shorter that I wanted to get something deeper down the field. When you’re playing a good team and you don’t hit what’s there and you try to get a little bit more than what’s necessary it kind of butts you in the bite, I guess you would say. We were playing so well in the first half and in the second half, we were just off a tick and that’s all it takes to lose a football game.”

Of course, what makes Mahomes so good is that he adapts.

Against man coverage this season, Mahomes has thrown 15 touchdowns and no interceptions while seeing it third-most in the NFL. Teams thought they could lock down JuJu Smith-Schuster and Marquez Valdes-Scantling in man, but time and time against Mahomes has made teams pay.

Do the Bengals have another trick up their sleeve to keep Mahomes off-balance Sunday?

It’s possible, and they’ll need one. The Chiefs haven’t missed a beat without Tyreek Hill on the field. After going down 21-3 last year, the Bengals forced four punts and an interception on the first five drives of the second half. They’re undoubtedly hoping they won’t need such defensive heroics this year against a Chiefs team that looks as dangerous as ever.

Mum jokes cat is ‘trying to kill’ her baby after catching...

Kevin Hart ‘Lied’ To Doctors About The Extent Of His Injuries