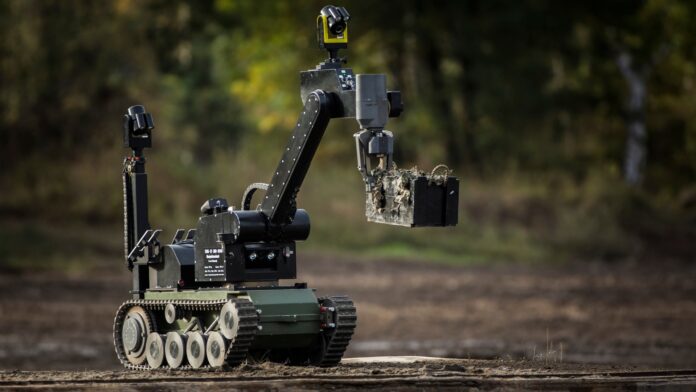 San Francisco’s Police Department (SFPD) has sought permission from the city’s Board of Supervisors to deploy robots that would kill suspects.

According to a policy draft(Opens in a new window), the SFPD proposes using its remote-controlled robots for “training and simulations, criminal apprehensions, critical incidents, exigent circumstances, executing a warrant or during suspicious device assessments.”

The San Francisco Board of Supervisors is expected to vote on the policy proposal next week.

If permitted, the SFPD would use the robots to kill people “when the risk of loss of life to members of the public or officers is imminent and outweighs any other force option available.”

The police department currently has 17 remotely controlled robots, but only 12 are functioning. The Verge notes that the robots are mainly used for defusing bombs or dealing with hazardous materials. The department’s Remotec F5A models and the QinetiQ Talon can be adapted to hold weapons. The US Army currently use(Opens in a new window) the QintetiQ Talon and equips it with grenade launchers and machine guns.

The Verge reported(Opens in a new window) that the original version of the draft did not include any mention of deadly force until a member of the city’s board of supervisors added that “robots shall not be used as a Use of Force against any person.”

The SFPD then responded by striking the phrase out(Opens in a new window) to insert a statement justifying the use of deadly force by robots in the case of imminent danger, according to Mission Local.

The request prompted a significant backlash from civil rights advocates and organizations, with Tifanei Moyer, senior staff attorney at the Lawyers’ Committee for Civil Rights of the San Francisco Bay Area, writing in an email read by Mission Local: “We are living in a dystopian future, where we debate whether the police may use robots to execute citizens without a trial, jury, or judge.”

Sharply criticizing the proposal, she added: “This is not normal. No legal professional or ordinary resident should carry on as if it is normal.”

The proposal, if successful, wouldn’t green-light the first use of a deadly robot by a US police force, however. In 2016, The Dallas Police Department used a bomb-disposal robot(Opens in a new window) armed with an explosive device to kill a suspect(Opens in a new window) who shot and killed five police officers and wounded several others. The robot was the same Remotec F5A model owned by the SFPD.

Australia’s Big Potato Is Now On The Market For One Lucky...

Couple Return From Honeymoon To Find 6ft Fence Around Their Home