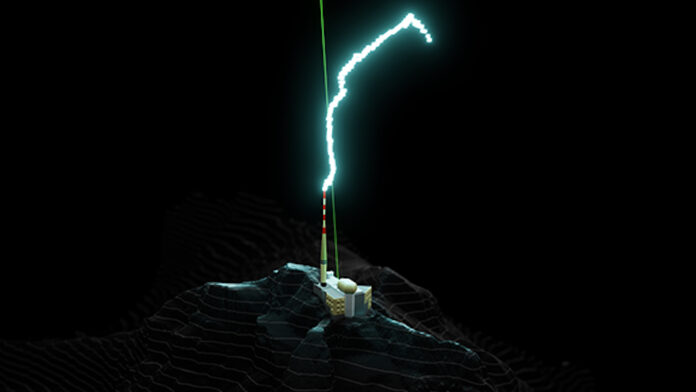 For more than 270 years, Benjamin Franklin’s lightning rod has remained the most effective form of external protection from electrostatic discharge. Until now.

In 1752, Franklin invented a conductive mast made of metal connected to the ground, which protects a surface with a radius approximately equal to its somewhat limited height. But what about sensitive sites spanning a wide region, like an airport, wind farm, or nuclear power plant?

Enter the LLR. Tested on a summit in Switzerland, the laser generates channels of ionized air, guiding lightning along its beam and, ultimately, deflecting it and any potential harm away from the area.

“When very high power laser pulses are emitted into the atmosphere, filaments of very intense light form inside the beam,” according to(Opens in a new window) Jean-Pierre Wolf, lead study author and professor in UNIGE’s Department of Applied Physics. “These filaments ionize the nitrogen and oxygen molecules in the air, which then release electrons that are free to move. This ionized air, called ‘plasma,’ becomes an electrical conductor.”

The rod, which stands nearly 5 feet wide and 26 feet long, weighs more than 3 tons. Its terawatt laser was installed at a height of more than 2,730 yards on the summit of Säntis in Switzerland—a prime location for lightning strikes—and activated for every storm forecast between June and September 2021.

“The aim was to see whether there was a difference with or without the laser,” project coordinator Aurélien Houard, a research scientist in the Laboratoire d’Optique Appliquée (LOA), said in a statement. “We compared the data collected when the laser filament was produced above the tower and when the tower was struck naturally by lightning.”

After almost a year of data analysis, researchers found(Opens in a new window) that the LLR does in fact work, effectively guiding lightning and increasing the tower’s protection radius by nearly 200 feet. The final report also highlights the Laser Lightning Rod’s ability to work in “difficult weather conditions,” like fog. Moving forward, the consortium aims to increase the height of the laser’s action, eventually extending an existing 32-foot lightning rod by 545 yards.

Bride fumes after being ‘upstaged’ by ‘pretty’ relative – but people...