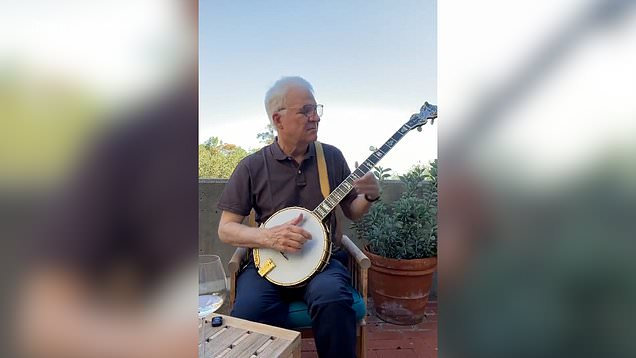 Steve Martin has shared a clip of him playing a tune on his banjo, and while fans were in awe of his skills, many didn’t know he’s actually won Grammys for his playing.

The actor and comedian, 75, has long incorporated a banjo in his stand-up sets and took to Twitter to share a video of him strumming along this week.

Sitting outdoors in the sunshine with a glass of wine to his side, Steve told his followers: ‘What’s happening? Banjo!’

Fans were quick to compliment him on his skills, writing: ‘I wish I could be half as good at one thing as you are at like 7 different things.’

Steve’s musical talent had previously escaped some, who wrote: ‘I’ve tried my hand at classical guitar for 2 years (normally a pick in hand, rock/metal type of guitar player) & I never was really able to clean up my playing. You’ve definitely practiced ALOT,’ to which another corrected them: ‘Since the 70’s….if not earlier. lol’.

Unbeknownst to some, Steve is actually a multi-Grammy award winner, even bagging the Grammy for best Bluegrass album in 2010 for The Crow: New Songs for the 5-String Banjo.

As well as Steve’s musical stylings, the album also featured appearances from the likes of Dolly Parton and Vince Gill.

In 2010, he also created the Steve Martin Prize for Excellence in Banjo and Bluegrass, to reward artistry and bring greater visibility to bluegrass performers in the mainstream.


MORE : Kate Beckinsale is truly inseparable from her cat Clive as she takes him to the dentist with her

Can you guess who this viral chef is from awkward teen photo?

Adele describes iconic Vogue shoot as a combination of ‘looking like Emily Blunt, and one with my t***s out’

Man returning rental car ends up ‘working’ while he waits as...