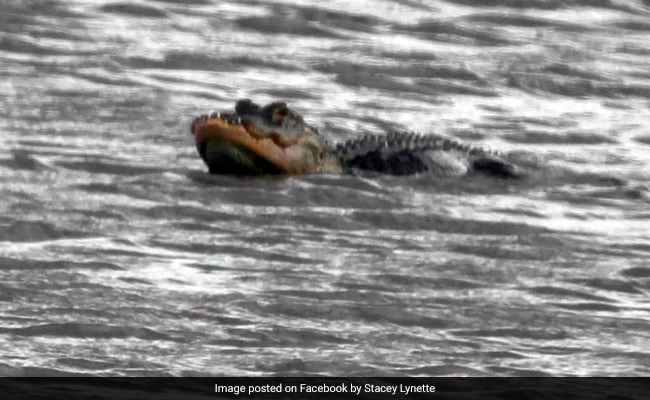 Florida is home to more than one million alligators.

A nine-foot-long alligator living in the murky water of Everglades, Florida, is missing a large chunk of its upper jaw, photos shared by a Facebook user show. In the images, the bottom jaw and teeth of the gator can be seen peeking above the water’s surface, but it was missing the entire top part of its jaw.

“I saw this gator far away and he looked weird to me,” Stacey Lynette wrote in the post, adding, “I grabbed my camera and sure as sh*t, the whole end of his top jaw is missing. The photo quality is crap because he was really far away. By the looks of him, he’s doing alright though.”

The only likely explanation could be that the gator got into a nasty brawl with a fellow alligator or an alligator hunter. Newsweek explained that alligators often fight each other over mating rights and territorial disputes, especially during the mating season. The gators can seriously injure each other to the point of losing limbs and eyes. Therefore, it is possible that this particular alligator lost its jaw as part of one of these fights.

The media outlet also reported that as hunting large reptiles is legal in Florida, it is possible that the gator got shot by someone trying to poach it.

The large reptiles are surprisingly good at healing themselves, and they are one of the few species of land vertebrates that can actually grow appendages back. But in this particular case, the gator clearly has not been able to grow his whole jaw back, but the enhanced healing abilities of the species likely helped him not bleed to death in the aftermath of whatever disaster led to him losing part of his face.

Meanwhile, it is to mention that according to Newsweek, Florida is home to more than one million alligators and they can be found across all of its 67 counties. They can grow to around 15 feet and weigh over 544 kg.

Man Thinks Pizza Hut Has Used His Face On Its Delivery...

‘I’m pregnant and my husband demanded I carry his luggage –...