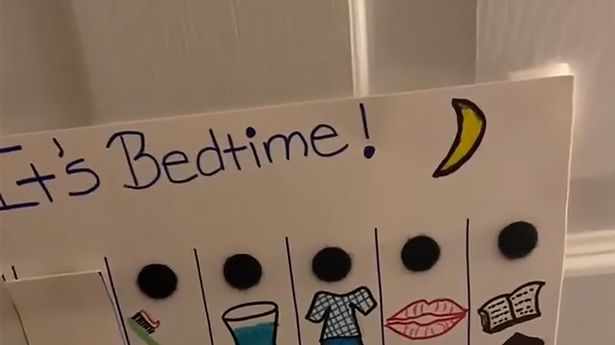 Getting your kids to go to sleep can be really difficult – and parents often rejoice when they can finally get a way to send their little ones off to dreamland. But what if there was a different way to encourage your children to get into a healthy bed time routine?

It’s time to rejoice, as parenting account @parents have posted a video on Instagram showing a ‘genius’ way to help your children enjoy going to bed, rather than them getting the fear of missing out when it’s their time to drift off.

It’s so good, someone even joked ‘is there a grown-up version? Asking for me’.

Lauren Giesting partnered up with Parenting to show the hack that her ‘amazing mother’ had shown her. And it’s really simple and requires minimal creativity.

Rather than annoy the children about bedtime, she realised that the best thing to do was to make them excited about it, by giving them a physical checklist.

The mum had listed important tasks on a sheet of paper, cut them apart into flaps, and put magnets on both sides to ensure that when the task was completed, the kids could visually see it disappear, knowing they’d completed it.

The tasks listed were ‘go potty, wash or bath, brush teeth, drink water, put on pyjamas, hugs and kisses and read books’. The mum even added cute drawings to each task, then, when it’s completed the flap can be closed and it reads ‘done’, with a tick.

Before the sheet, she described bed time as ‘disastrous’, but now it’s taken her children’s bedtime from between ‘thirty, to maybe an hour, to maybe ten minutes’. She finished the video by saying it was ‘amazing’.

In the comments, people were amazed and said they would certainly be trying it out to try and make bedtime smoother.

One wrote: “Trying this out for sure! And possibly a morning routine one too. My son does not do too well for both.”

“Need this for my husband”, someone joked.

Another suggested: “Too cute! Would definitely use this! I’d laminate it though.”

“I would switch the last two but yes!”, someone praised.

Would you try this for your kids? Let us know in the comments.

On A Roll With Freestyle Skater, Vasilisa Maslova

‘Clearest ever’ spooky figure caught on camera by ghost hunters at...