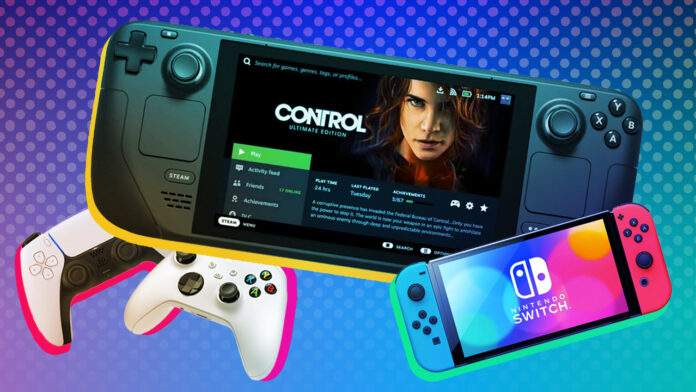 We’re quickly approaching the Steam Deck‘s one-year anniversary, and what a year it’s been for this gaming hardware hit. For starters, Valve’s high-powered handheld PC is more capable than ever thanks to numerous firmware updates that have added new features and options. Equally as important, you can buy a Steam Deck whenever you want instead of waiting months in a pre-order backlog. More and more games have become Steam Deck verified, too. Although one million sales would be a dismal number of moved units for a mainstream console, that’s a pretty big success for an unproven piece of experimental Valve hardware.

With an increasing number of gamers owning a Steam Deck, we’ve gotten a broader view of how the handheld fits into their lives (for some, it even reignited a love for gaming). And after my first holiday season with the system, I came to a surprising realization: The Steam Deck doesn’t replace my Nintendo Switch. Instead, it makes me no longer want a PlayStation 5 or Xbox Series X/S.

A Tale of Two Tablets

The Nintendo Switch and the Steam Deck coexist quite nicely in my gaming life. And I get how, on the surface, that might not make much sense. After all, they’re both tablet-like handhelds that aim to deliver console-quality games on the go or docked to a TV. They’re so similar that one should theoretically render the other redundant.

Launching five years after the Switch, the Steam Deck feels like more than just a Switch rival: It’s a next-generation Switch, with graphical capabilities that far surpass Nintendo’s increasingly aging machine. If the Steam Deck has filled that handheld gaming hole in your heart that the Switch once occupied, I totally get it. It’s the Switch Pro that wasn’t canceled.

However, many differences keep me from fully making the Steam Deck swap. For starters, the Steam Deck is too big. The Switch is already borderline oversized, not counting the Switch Lite. The Steam Deck, although ergonomically comfortable, is bulky. Combine that with brief battery life for demanding games, along with frequent patches that require an internet connection, and I almost never take my Steam Deck outside of my apartment. Of course, playing in bed, on the couch, or docked to a TV is still leagues more convenient than sitting at a desk, and synced cloud saves make the Steam Deck a wonderful extension of regular PC gaming. Still, the hardware isn’t quite as convenient as a traditional handheld gaming system.

Although the Steam Deck is one of the most approachable and user-friendly gaming PCs of all time, being a PC means it comes with annoyances you don’t get with consoles. To have the freedom to customize graphics and install whatever software you want, you must know how to deal with compatibility issues or controller mapping tweaks that make a game playable. It’s not an inherently better or worse way to play, just a different one.

Finally, the Steam Deck doesn’t (officially) have Nintendo titles, and considering Nintendo consistently puts out many of the best games in the industry, that’s reason enough to never abandon the Switch. And if a third-party game, be it a modest indie or an impossible port, runs fine on the Switch (Crisis Core: Final Fantasy VII Reunion is great!), that’s where I’ll spend most of my playtime.

Finally, there’s a device that transcends the petty console wars.

Microsoft has always been friendly to PC gaming, and thanks to the Steam Deck, I play my Xbox far less…and that’s before even figuring out how to put Xbox Game Pass on this thing. From Halo and Forza to High on Life and Immortality, I played Xbox’s heaviest hitters on the Steam Deck. Heck, I even sunk way more hours into acclaimed games that I don’t personally like, such as Elden Ring and Vampire Survivors, just to see what all the fuss was about.

Even more notable, because of Sony’s recent PC gaming pivot, the Steam Deck has become the PlayStation I no longer need to buy. It’s the return of the PSP. It’s the Vita that’s actually worth owning! My holiday Steam Deck backlog was chock full of awesome games that were previously PlayStation exclusives. Death Stranding! Final Fantasy VII Remake! Spider-Man! For a second I considered picking up Uncharted, despite hating Naughty Dog’s modern game catalog.

Granted, there are some obvious caveats with this PlayStation replacement strategy. Unlike Microsoft, which puts its first-party games on PC the same day that the titles hit Xbox, these PlayStation ports tend to appear a few years later. God of War and Horizon came to PC essentially as playable commercials for upcoming PS5 sequels. You need patience. You might also need to accept lower-quality visuals on the Steam Deck compared with the PS5, let alone a high-end gaming PC. Of course, years of enjoying the Switch have trained me not to worry about these drawbacks.

There’s a bit of a hard-core bubble in the way we talk about the Steam Deck and its relative ease of use for mainstream audiences. If you don’t already know what the Steam Deck is, I wouldn’t recommend it unless you’re willing to put in work for your entertainment. Still, I love my Steam Deck, and I’m loving it more as its true role in my gaming ecosystem comes into focus. Together, the Steam Deck and the Nintendo Switch have replaced traditional gaming PCs, as well as PlayStation and Xbox consoles. Long live high-powered handheld gaming!

For more on Steam Deck, learn how Valve’s failures paved the way for Steam Deck’s success, and check out our Steam Deck retro emulation guide.

Steven Spielberg Reveals Why He’s Watched ‘E.T’ The Most Out Of...

Female cyclist claims she needs to be constantly naked as clothes...

Mum catches cat-sitter out after hiring them to look after pet...