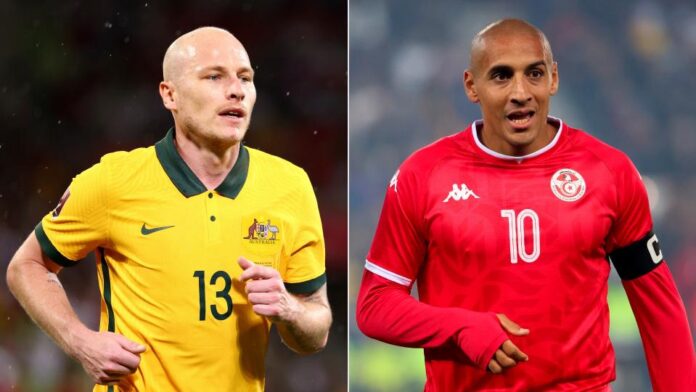 A sneaky important match in Group D sees two group stage underdogs Tunisia and Australia meet in what could essentially be billed as an elimination game for both sides.

If Australia fall, they could indeed be dumped from the World Cup group stage with one match still remaining, depending on the result in the other game. Tunisia wouldn’t be eliminated with a defeat here, but with a match against France still remaining, it would be awfully difficult for them to find a pathway to advancement.

Still, it’s not expected to be an end-to-end affair as these two teams will look to keep the opponent out of the net, and goals will likely be at a massive premium.

With Denmark left vulnerable in the result of defeat to France, there’s a lot to play for in this game between two sides many fans have counted out from their knockout stage brackets.

This game is given a big chance to be a tight affair, with both teams on plus odds. Both teams will want to secure a positive result, especially Tunisia who still have a game against France to navigate.

It’s interesting, given the defensive nature of these two teams at a World Cup, that the under is not an even heavier lean than -175, as we’ve seen some games already in this tournament with an even higher disparity.

Tunisia vs. Australia: 3 things to know

Tunisia have a largely clean bill of health. They have midfielder Ellyes Skhiri healthy to play despite a broken cheekbone, and he appeared in the opener against Denmark wearing a face mask. Their only miss is Omar Rekik who has been out since late October with a muscle injury and was not selected to the squad.

Australia also have a relatively healthy squad. Super-sub Ajdin Hrustic is a part of the squad despite an ankle injury, but he was not risked against France off the bench with the game gone. They are without Martin Boyle who was withdrawn from the squad late due to injury, but Harry Souttar has recovered from an ACL tear in time to take part.

MORE: Full injury tracker for all 32 teams at the 2022 FIFA World Cup

While it’ll be tough sledding going forward for both sides, Tunisia will be far more motivated go to for victory than Australia, who will be happy with a point knowing they may be able to spring the trap on Denmark in their finale.

Tunisia still have a match remaining against France, and with just one point from their opener, asking to get a result against the defending champions will be a tall order. Instead, they’d like to grab three here and then play for a draw in their final match.

There’s very little in this match from an attacking sense on either side. The under has almost no value at -165, but there’s slightly more palatable odds on both teams not to score.

Neither side produced much of an attacking display in their opener, mostly due to a lack of possession. Still, neither side showed an ability to counter well, and in a match where someone will have to hold the ball, it could be a struggle for both squads to produce goals.

Tunisia especially are proficient defensively. Take away the 5-1 friendly defeat to Brazil in late September, and Tunisia haven’t conceded a single goal since January, an incredible run of 945 minutes of action. It will be tough sledding for Australia.

If you want to really double down on a match devoid of attacking sense, you can get a scoreless draw for good value.

Through just one round of group stage matches, there were already four scoreless draws this World Cup. There was just one in the entire 2018 World Cup and seven through the entirety of the 2014 tournament.

Given the aforementioned lack of goalscoring ability on both sides of the ball, and the fact that Tunisia have already played to one scoreless draw this tournament and three total since March, it’s entirely possible they could engineer another. You could take a scoreless first half for +138, but the full-time scoreless draw presents much more value.

Woman shares trick to get rid of ants for under £2...

Man’s outrage as restaurant charges £10 per head to bring cake...