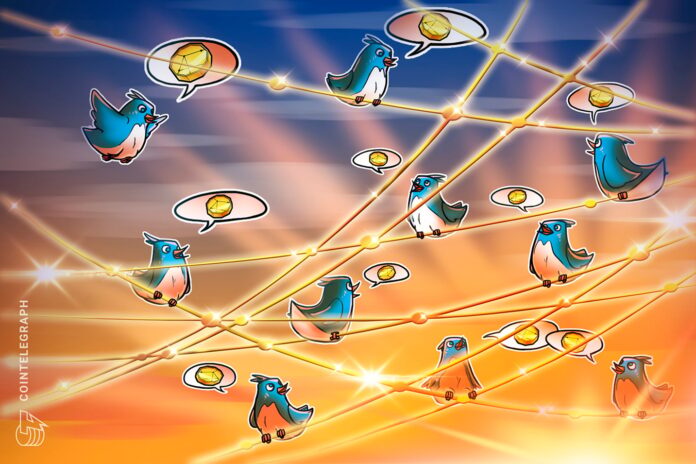 Twitter has quietly expanded its new crypto feature that enables users to search the price of individual tokens, adding at least another 30 tokens.

The new additions are part of the social media giant’s “$Cashtags” feature, announced by the Twitter Business account on Dec. 21. Bitcoin (BTC) and Ether (ETH) were the first to be part of the new feature.

Tweeting or searching for a crypto token or ticker symbol with a dollar sign ($) in front now links to pricing graphs for those symbols.

Dogecoin’s Twitter community was delighted with the addition, given new Twitter CEO Elon Musk has offered words of support for the cryptocurrency on many occasions.

There were, however, some notable omissions at the time of writing, such as BNB (BNB), USD Coin (USDC), OKB, Lido Staked Ether (stETH), Polkadot (DOT) and Tron (TRX).

This was despite the crypto tokens being listed in the top 20 cryptocurrencies by market cap.

Related: Crypto fans should get behind Elon Musk’s subscription model for Twitter

It’s unclear how the tokens will eventually be added, but the Twitter Business account’s original announcement said that more cryptocurrencies would continue to be added.

The price index is understood to pull its data from TradingView, but also includes a link to view the cryptocurrency on the online trading platform Robinhood.

No partnership agreement between the two have been officially published, however.

Conspiracy Theories Start After Someone Taped A Whole Chicken On To...

‘I kicked pregnant sister out after ‘unforgivable’ demand – it’s her...

Beachgoer Baffled After Spotting Bizarre Fish With Teeth On Shore