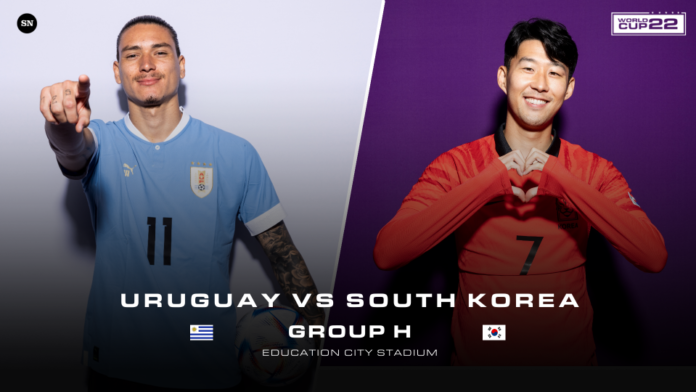 Both these sides will fancy their chances of starting strong and launching a knockout-stage bid at the Education City Stadium, as they seek to steal the limelight from Portugal, and Cristiano Ronaldo, who are bound to draw much of the group attention.

This match will represent the third time that these two teams will have met in FIFA World Cup action, with the South Americans aiming to make it a treble, having won both previous encounters (1-0 in 1990 and 2-1 in 2010).

Sporting News is tracking live scoring updates and highlights for Uruguay vs. South Korea at the 2022 World Cup. Follow below for complete results from the Group H match in Qatar.

19th min: Federico Valverde creates half a chance for himself by brilliantly controlling a long pass from Jose Maria Gimenez, but hooks his left-foot volley just wide of the right post from the edge of the area.

16th min: A good long ball sets Kim Jin-su away down the left flank for South Korea, but the ball had just gone over the byline before his hanging cross is dealt with by Uruguay keeper Sergio Rochet.

13th min: The pace has slowed after a fairly frenetic opening, both sides trying to play out patiently from the back.

8th min: Na Sang-ho gets to the byline to win a corner for South Korea, but Son, wearing a protective mask after recent facial surgery, doesn’t quite connect properly with it and it curls away from everyone.

5th min: Liverpool’s Darwin Nunez already looking a threat for Uruguay, and Na Sang-ho pulls him back with a tug of the shirt to prevent the 23-year-old forward escaping.

3rd min: Screams and cheers from the South Korea fans every time the ball finds its way to Son Heung-min. Fair to say they’re very happy the Tottenham star has been passed fit to play.

1st min: The formalities are over, and we’re underway at Education City Stadium.

5 mins from kickoff: Time for the anthems. Uruguay first, and now South Korea.

10 mins from kickoff: Which South Korea players might score a goal today to rank alongside these in their World Cup history?

Some greats of @theKFA have found the back of the net at the #FIFAWorldCup #Qatar2022 pic.twitter.com/nZMM6Z1Zqc

20 mins from kickoff: Getting close to game-time now. Expecting a thrilling match to get the action starting in group H, where every point could count. Cristiano Ronaldo and Portugal get their tournament started against Ghana in the match following this one.

45 mins from kickoff: Not an easy 90 minutes in store for the commentators…

Good luck to the BBC commentators for the Uruguay vs South Korea game pic.twitter.com/4CvK351Jfh

50 mins from kickoff: Diego Forlan is in attendance at the Education City stadium and he’s bumped into a fellow Manchester United cult hero in the stands. The iconic Uruguayan striker shared a photo on Instagram featuring Ji-Sung Park: the South Korean midfielder, Champions League winner and one of Sir Alex Ferguson’s favourite sons. Just 212 international caps in this picture!

1 hrs 10 from kickoff: South Korea have released their lineup, lead by Tottenham’s Heung-min Son. The prolific captain will be donning a face mask, as he is still recovering from fracturing a bone around his eye.

1 hrs 30 from kickoff: The Uruguay lineup has been released as we continue to count down to kickoff. South Korea will have their hands full with the front-three fielded by the Uruguayans. Many viewers will have their eyes on 20-year-old Manchester United starlet Facundo Pellistri, who starts on the left wing alongside Luis Suarez and Liverpool’s Darwin Nunez.

1 hrs 45 from kickoff: South Korea have been drawn in a tough group but fans will still be dreaming of an appearance in the knockout rounds in Qatar. Their greatest World Cup performance took place on home soil, when South Korea and Japan shared a controversial 2002 tournament. The Koreans charged all the way to the semi-finals, stunning Portugal, Italy and Spain along the way.

2 hrs 15 from kickoff: As Uruguay kickoff their Qatar adventure, they also begin the final World Cup for two all-time greats. Luis Suarez and Edinson Cavani have scored a combined 126 goals for their nation and in the twilight of their dazzling careers they’ll hope to add to that total.

2 hrs 50 from kickoff: It’s Luis Suarez back in World Cup action today which gives us the perfect opportunity to share this clip once again. There was simply no questioning the lengths the former Liverpool forward’s was prepared to go to to ensure his team progressed. Here’s his infamous handball against Ghana in the 2010 quarterfinals.

#OnThisDay in 2010, a handball by Luis Suarez prevented Ghana from scoring in the last minute and Asamoah Gyan missed the penalty – with Uruguay triumphing in the shoot-out to make the World Cup semis.#FifaWorldCup pic.twitter.com/3BmBJXXrKz

3 hrs 30 from kickoff: Hello, and welcome to The Sporting News’ live coverage of this Group H opener between Uruguay and South Korea. There will be a lot of focus, as there always is, on one particular man in this group — with Portugal and Cristiano Ronaldo to come for both these sides, along with African powerhouses Ghana. But don’t be surprised if there are other headline-makers, and a few twists and turns along the way. Both these teams have plentiful talent of their own, who could grab the spotlight today in this opener. Let’s get going!

There were question marks pre-match around the fitness of Edinson Cavani and Barcelona defender Ronaldo Araujo, who will not take part in this game. Veterans Diego Godin and Luis Suarez both start.

Tottenham star Son Heung-min has been passed fit for the World Cup to lead the South Korea attack, despite fracturing a bone around his eye earlier this month. He’s expected to feature prominently in Qatar but will be donning a face mask to protect his injury.

The match will start at 4 p.m. local time at the Education City Stadium. Here’s how that translates into timezones around the world:

According To Experts The Remains Of Noah’s Ark Could Have Been...