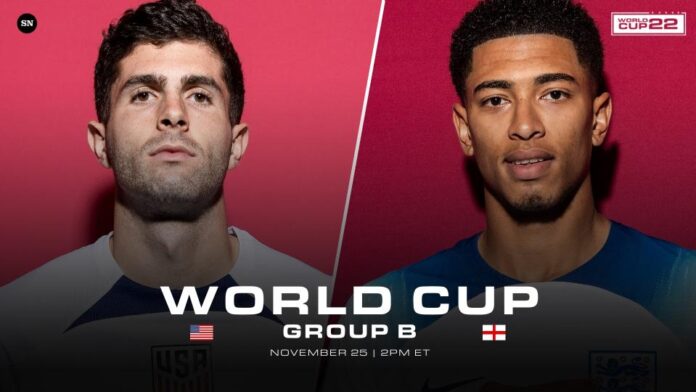 When England take on the USA on Friday at Al Bayt Stadium, it will be a chance at another three points, which for England would mean locking up qualification to the Round of 16. But it goes beyond that for the Americans, which makes the battle that much more fascinating.

England put forth one of the stronger displays of any team in their opener, throttling Iran 6-2 to take a commanding lead of Group B. Another win would mathematically lock up a knockout-round berth and likely the top spot in the group, after Wales’ defeat to Iran earlier in the day. The positive goal difference established with the lopsided score vs. Iran is an added edge in the chase for the top spot.

The USA are even more desperate for the points given they allowed Wales a late equalizer to settle for a draw in their group opener. But beyond the final score, they’re also desperate to show the English that they’re to be feared as a rising football/soccer power. With several of the U.S. players based in England, there will be no intimidation factor for the Americans.

A U.S. victory would send them top of the group and make for an unpredictable final day. The USA will take on Iran, while England gets set for an all-British matchup against Gareth Bale’s Wales — who will need a win to keep their tournament hopes alive.

The Sporting News is tracking live scoring updates and highlights for USA vs. England at the 2022 World Cup. Follow below for complete results from the Group B match in Qatar.

MORE: How to bet USA vs. England in the World Cup

2 hours 20 mins from kickoff: Of all the ways to approach this match, this is one of them!

On this day in 1783, the last British troops evacuate New York City.

2 hours 32 mins from kickoff: Gregg Berhalter rewarded his U.S. players with quite a special gift ahead of the match against England.

Last night, every @USMNT player was gifted a personalized Tiffany & Co. bracelet with their name in Arabic and their unique FIFA World Cup number 💍🇺🇸@JennyTaft shares the message behind the gift ⬇️ pic.twitter.com/3mpfqw28pl

2 hours 57 mins from kickoff: There were four Fulham players on the field in USA vs. Wales, the most of any club. Today, with no Fulham players on the England squad, it’s just Tim Ream and Antonee Robinson for the U.S. to represent the Premier League club. They posted a humorous Tweet recognizing their torn nature in today’s match.

It’s actually quite a smart approach from Fulham. MLS club LAFC got serious flak for their aggressive post on Twitter furiously celebrating Gareth Bale’s late goal against the United States.

From a wider perspective, Gregg Berhalter and the U.S. players have been open about how they feel a familiarity with England players via their own Premier League players hands them a slight advantage in today’s match.

Well, this is awkward… 😳

3 hrs 17 mins from kickoff: If there’s one thing to know about this match ahead of time, it’s the referee set to take charge. Venezuelan official Jesus Valenzuela won the CONMEBOL Referee of the Year award in 2021, but he’s known for being an absolute yellow card machine.

While CONMEBOL itself is a yellow card factory, Valenzuela gave a gargantuan number of cautions through his recent match history. Here’s a closer look:

FIFA has assigned Venezuelan referee Jesus Valenzuela to officiate the England vs. #USMNT match at the #FIFAWorldCup #Qatar2022

Valenzuela was given the CONMEBOL best referee award in 2021. He dishes out CARDZZZZZZZ.

Officiating was an issue in USA vs. Wales. pic.twitter.com/Lbl2E68aXC

3 hrs 35 mins from kickoff: With the game still a few hours off, take a look at my betting preview for the match here. It’s not ideal reading for U.S. fans, as I expect England to win by multiple goals with a smothering second-half performance.

This tournament has, however, been extremely hard to predict, so that doesn’t by any stretch mean the U.S. have no chance to secure a result in this match. They’re just up against an extremely strong side with lots of talent!

How do you see the match playing out? Here’s my predictions. Sorry, #USMNT fans.#ENG #USA #FIFAWorldCup #Qatar2022 https://t.co/6d9M9nHURz

3 hrs 54 mins from kickoff: One of the greatest World Cup upsets of all time came back in 1950 when the United States stunned England 1-0. England came into the tournament among the favorites, while the United States were a rag-tag bunch of part-time players not expected to challenge anyone for anything.

At the 1950 World Cup, the @USMNT was comprised of part-time, amateur players. That group of 11 men made themselves legends with a 1-0 win over the heavily favored English side in the most shocking upset in tournament history! 🇺🇸 pic.twitter.com/GdizXthGvJ

4 hrs 5 mins from kickoff: Ever wonder why the beautiful game is called “football” in England but “soccer” in the United States? Here’s a brief explanation why, from yours truly. It’s only a recent shift in linguistics!

4 hrs 38 mins from kickoff: Diving a little more into scenarios for the United States — Today vs. England is nearly meaningless. A draw would mean they’re able to fend off any Wales result on the final day, while a win means they only need to draw with Iran to make it through.

Still, no matter what, the United States need a result on the final day against Iran to make it through, and likely a win. In my opinion, having almost zero stakes against England is a positive for the U.S. as they can now play much more free of pressure without feeling like they need a result. They can lose by 10 goals to England, and a win over Iran still almost surely sees them through.

Here’s the basic #USMNT qualification scenarios based on today’s possible results vs. #ENG

5 hrs 5 mins from kickoff: WHAT a result for the United States in the first game of the day. With Iran beating Wales, the United States are in a fantastic position to advance through the group. In fact, now the match against England becomes simply a bonus.

Here’s the simple situation for the U.S. to qualify for the knockout stage: Win vs. Iran and you’re in. There are a few more quirks to that, but it’s essentially as simple as that.

Watch the Wales vs. Iran highlights in the USA:

WHAT AN ENDING. Iran scores two goals in stoppage time to get the victory over Wales 🇮🇷

Rewatch their last minute heroics in our 90′ in 90″ highlights ⬇️ pic.twitter.com/5PGDs1I5Fc

The match against England today now becomes a bonus. Defeat, even by a hefty margin, wouldn’t be earth-shattering. The U.S. can go for points today with very little to lose.

5 hrs 15 mins from kickoff: The USA will be wearing a blue kit for its final two matches. It’s a kit that was not received well when it first came out.

USMNT to wear blue kits in remaining Group B matches against England on Friday and Iran next Tuesday, per a spokesperson.

Only played one match in them: 0-0 draw vs. Saudi Arabia in September. pic.twitter.com/UCWQVpG21d

5 hrs 30 mins from kickoff: The last match in which England and the USA met in the World Cup will always be remembered for this howler by England ‘keeper Robert Green, which allowed Clint Dempsey to net and level things up 1-1.

Clint Dempsey happened and so did Rob Green. 🇺🇸
pic.twitter.com/buIMDQjFtf

And that 1-1 result led to this famous back page in the USA:

But did you know that the two protagonists of that moment got together years later to talk about it? Dempsey got emotional about it.

More: Why USA vs. England match is a big deal

The U.S. team has confirmed that all players are healthy and available after a controversy that erupted over whether injury-prone playmaking talent Gio Reyna was healthy enough to come on as a sub vs. Wales. The player and coach had differing accounts after the match.

Whether Reyna starts over right winger Tim Weah is one of two main lineup questions for the USA. The other involves midfilder Weston McKennie, who looked well short of full fitness against Wales and had to come off. Leeds United’s in-form Brenden Aaronson projects as a likely starter in his place.

Manager Gareth Southgate made it clear he won’t be resting Harry Kane for this matchup even though the England captain picked up a knock against Iran that required a scan.

With Harry Maguire recovered from dizziness in the wake of the Iran match, the only player out injured is James Maddison (knee), who has yet to train with the team according to reports.

The Americans are outmatched on paper against the star-studded English team which flexed its muscle in a lopsided 6-2 win over Iran. But the USA have never lost to England at the Word Cup, with a win and draw in their only two matchups on this stage.

Team USA will be playing with a chip on its shoulder as the underdog at Al Bayt Stadium, but also because it needs any point it can muster after letting victory slip through its hands against Wales. England can clinch a spot in the knockouts — and more than likely first place — with a victory