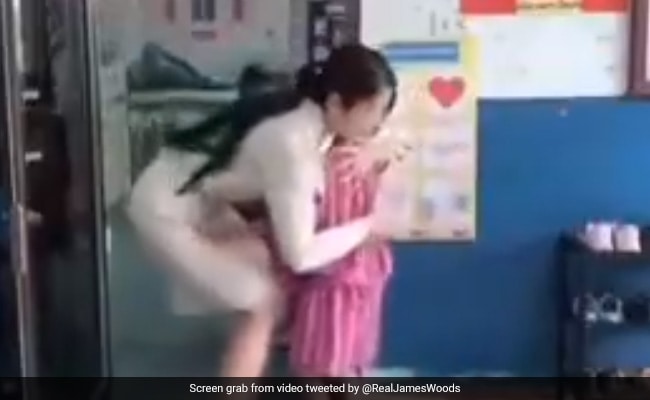 A video is going viral on social media that shows a teacher greeting her students before class. The short clip shows a row of toddlers entering the class after engaging with the teacher.

The now-viral clip was originally posted on Twitter by Alvin Foo and later retweeted by other users. Among them is actor James Wood who said in his tweet: “Just the cutest thing imaginable. What a great teacher.”

Just the cutest thing imaginable. What a great teacher. pic.twitter.com/IDb745wyF0

The video shows the teacher greeting each student in a special manner. While she jiggled with a few of them, others received a warm hug.

Some of the students were also given a fist bump by the teacher. The place where the video has been shot is not known.

Twitter users loved the teacher’s gesture. “Too cute,” said one of them. “Adorable! An example to be followed,” said another.

Teachers play a very important role in students’ lives, and if they are good and kind, it becomes a blessing.

A few days ago, another video created a lot of buzz on social media. It showed a Delhi school teacher having a dance session with students on the last day of summer camp.

The clip, which was shot inside a classroom, showed the students performing the evergreen song Kajra Mohabbat Wala from the film Kismat.

In the video, girls, standing in a straight line, were seen performing their parts one by one and leaving the frame. Soon, their teacher too was seen in the queue, dancing to the tunes. Towards the end, all of them were seen on the dance floor.

The clip was shared by Manu Gulati, the teacher herself. As per her Twitter bio, Ms Gulati is “a proud Delhi government school teacher, a passionate mentor, a Fulbright Fellow and a PhD Scholar.”

Zookeepers are sharing the dark hidden truths of what really goes...

Daughter Disowns Father After Seeing Photo Of Him Posing With Dead...