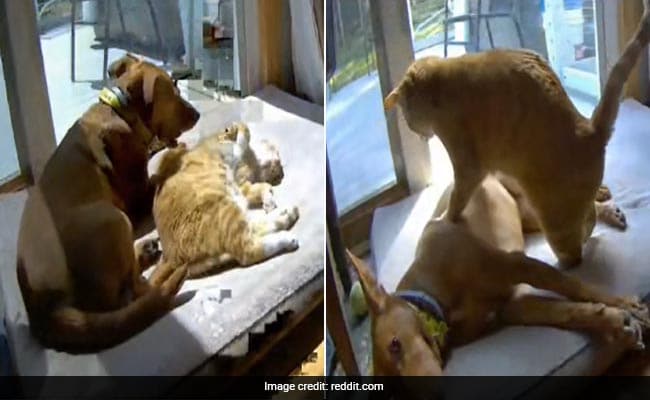 A cat and dog have gone viral on the internet for their unusual sibling dynamics. A video of them approaching each other in their sleep has left social media users amused.

Shared on Reddit, the video shows two different clips, the first one of how Joules the dog joins Kelvin the cat for a nap and the second of how Kelvin joins Joules.

In one video, Joules can be seen very carefully positioning itself behind Kelvin, making sure not to wake the other up. On the other hand, the second clip shows Kelvin climbing right on top of sleeping Joules, headbutting the dog in the end.

Watch the adorable video below:

The video has taken the internet by storm. So far, the post has reached over 181,000 upvotes and nearly 1,500 comments.

Some users knew exactly why the dog was cautious around its cat siblings. One user wrote, “Cats are crazy unpredictable and dogs know it. I feel like this dog was cautiously approaching to cuddle without getting slapped.” Another said, “I think when the dog joins the cat, he’s waiting for the cat to cuddle up to him,” while a third added, “exactly, that dog was waiting for his little spoon to snuggle in.”

One Reddit user even jokingly wrote, “When dogs join cats they’re thinking ‘I just want to be near you,’ and when cats join dogs they’re thinking ‘I just want to use you as a step stool/pillow/bed/heater.’ I know they love them too, it just looks different.” “Poor doggo looks like he doesn’t know whether he’s gonna get the shit smacked out of him or loved on. Just cat things,” said another.

Meanwhile, videos featuring cats are quite common on social media. A while back a feline went viral on the internet for befriending a huge rat living in its garden that it was supposed to hunt. In a video, the cat was seen hugging the rodent, before proceeding to clean it and groom it like a child. The video had reached over 85,000 upvotes on Reddit and had garnered more than 2,000 comments.

Couple’s Garden Sculpture Is Lost Masterpiece That Could Be Worth £8...